Aretha Franklin is not dead, nor is she “near death,” despite what you might have read on social media today. The legendary singer appears to be the latest victim of an internet death hoax, thanks to a fake Twitter account that tweeted out the following message earlier this morning.

It Is With Sad News That We Announce The Passing Of The Queen Of Soul Aretha Franklin
1942-2017#RipArethaFranklin #ArethaFranklin pic.twitter.com/LPH571dlix

As you can see, the account, though believable at first glance, is fake. There are two “n’s” on the end of Franklin’s name in the Twitter handle. Even still, many people saw this tweet and immediately thought that Franklin had passed away. It didn’t take long for “RIP” messages to flood the social networking site.

It didn’t help that a site by the name of Fameolous Daily reported that an unnamed source told them that Franklin was hospitalized and “not doing good.” The site posted the following photo and message on Instagram several hours ago.

There has not been any kind of confirmation of Franklin’s rumored death by any reputable news outlet. Neither Franklin’s official Twitter account nor her official website have updated fans on any sort of health issues that Franklin might be suffering from. Even still, fans of Franklin have been freaking out, many fearing that the Queen of Soul is knocking on death’s door.

According to Newsone, Franklin, 75, has been a victim of failing health rumors for several years. Every few months, it seems, there is a story about Franklin having cancer.

“Rumors of the diva’s health problems resurfaced in May, when she announced to an audience that she was battling an ‘upper respiratory viral infection.’ Still, she managed to sing at the event honoring Clive Davis, the New York Post reported at the time. That same month, the National Enquirer published reports of Franklin having lost more than 100 pounds because of a “cancer relapse,” an anonymous source told the news outlet known for gossip. ‘She was due to have radical chemotherapy treatments, and was told by doctors she needed to lose weight if she wanted to survive,'” Newsone reports.

However, Franklin seems to be doing just fine these days. According to the Detroit News, Franklin made an appearance at Elton John’s gala in New York City on November 8. According to the report, Franklin took part in the event, closing the night with a “collection of songs.” The gala was an incredible success, raising approximately $4.4 million for AIDS research.

There was not any mention of an ill-looking or frail Franklin in that report.

Earlier this year, Franklin announced that she was going to retire from the entertainment world.

“I feel very, very enriched and satisfied with respect to where my career came from, and where it is now. I’ll be pretty much satisfied, but I’m not going to go anywhere and just sit down and do nothing. That wouldn’t be good either,” she explained. 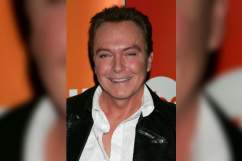 David Cassidy Dies, Days After It Was First Reported

Read More
Celebrities, Death Hoax
Aretha Franklin is not dead nor is she dying of cancer in the hospital. The Queen of Soul fell victim to a death hoax on Tuesday.