A flier from the investigation of the 1982 disappearance of Kathleen Durst, the wife of Manhattan real estate developer Robert Durst, photographed in 2001. As an HBO documentary unfolds about Robert Durst, the real estate scion, the Los Angeles district attorney is reviewing the killing of Durst's friend Susan Berman in 2000.

Robert Durst, a wealthy Manhattan real estate executive and the subject of Lifetime’s newest movie, The Lost Wife of Robert Durst, was arrested for his allegedly murdering a friend in 2015. His wife, Kathleen McCormack Durst (Kathie), went missing in 1982. The fictionalized movie about the event premieres Saturday November 4 at 8 p.m. on Lifetime.

The case was all but forgotten with no real conclusion until 16 years after the disappearance. It was revived in 1998 after a man told police he knew what happened to Durst in the winter of 1982. While that tip didn’t give police much more to work with, it did set off a new look at the disappearance. When investigators discussed the disappearance with eyewitnesses again, they found the stories have changed and that the case needed more investigation.

McCormack was declared dead earlier this year by a Manhattan judge. The date of death is January 31, 1982, the day she was last seen by Durst. McCormack’s family is now pursuing a multi-million dollar lawsuit against Durst, saying he killed her and hid her body.

Durst is currently being held in California on first-degree murder charges for the death of friend Susan Berman. Officials believe that Durst killed Berman to prevent her from discussing the details of his wife’s disappearance. The hearing was scheduled for October 2017 but has been pushed back to April 2018 because of the destruction of some of the homes of the defense team during Hurricane Harvey.

Here’s what you need to know about Kathie McCormarck Durst:

HBODurst has been involved in a long range of investigations since Kathie’s disappearance.

McCormack was a fourth year medical student a few months short of earning her degree at the time of her disappearance. McCormack was in medical school at Albert Einstein College of Medicine in the Bronx studying to become a pediatrician. Though the couple owned a cottage in South Salem, they also owned 2 apartments in Manhattan closer to the medical school.

Before attending medical school in Manhattan, McCormack was a nursing student at Western Connecticut State College in Danbury. Ellen Strauss, a classmate from the college, said Durst wanted to be a doctor and take care of children. When Strauss met Durst for the first time, she said he was not a warm or welcoming person.

That was the only time Strauss visited the Durst’s cottage while McCormack was alive. After McCormack’s death, Strauss went back to the cottage to go through the garbage and salvage items that Durst was trying to get rid of. She took files and notes regarding what she found in the garbage, which she later turned over to HBO filmmakers when they began filming on their documentary “The Jinx.”

Eleanor Joy Schwank, a nursing school classmate of McCormak, said that she used to get calls from McCormak about Durst’s violence. Though she says she never witnessed the violence, she knew that it was physical because McCormak told her it was.

Everything isn't always as it seems. Get a glimpse into the lives of Robert and Kathie Durst on #TheLostWifeofRobertDurst this Saturday. pic.twitter.com/ZB5JflLu9T

On the evening of her disappearance, McCormack had attended a party at a friend named Gilberta Najamy’s house. Najamy told investigators that McCormack was dressed in sweatpants and that that seemed strange because McCormack was usually dressed much nicer than that. She also said that McCormack had argued with Durst over the phone before leaving and when she was leaving the party, McCormack asked Najamy to promise she would check it out if something bad happened to her and that she was afraid of what her husband would do.

Durst told police that he last saw his wife on that Sunday night when he put her on a train in Westchester. She was supposedly traveling to their penthouse apartment in Manhattan. He told investigators that she was going back to the city to make her appointments at her medical school on Monday, but she never showed up to those appointments.

It was also reported that Durst had talked to McCormack once she reached Manhattan from a phone in the house. When investigators asked for phone records, he said he had actually made the call from a payphone while he was walking the dog. Investigators were skeptical because when they checked into this, they found that the nearest payphone was 3 miles away and the night in question was rainy and cold.

At the time of the original investigation, there were eyewitnesses that placed her in Manhattan that now say they may have been mistaken in their sightings. Two friends who were holding onto papers for McCormack said the papers were stolen in burglaries after the disappearance. The cottage owned by Durst wasn’t searched at the time of the investigation because investigators had reason to believe she had made it to Manhattan.

3. She Wasn’t Reported Missing Until February 5

Though Najamy had been calling the police about her friend’s absence for days, she became increasingly concerned when McCormack failed to meet her in downtown New York City even though they’d had plans.

Durst said the reason he’d waited so long to report McCormack missing was that the couple occasionally wet days without contact. In the days after reporting his wife missing, Durst posted reward posters looking for help finding her. Friends have reported that Durst sometimes speculated that a drug dealer killed his wife, since she was an occasional cocaine user.

4. She May Have Been Treated For Domestic Violence

According to the NY Daily News, 4 months before she vanished, McCormack allegedly climbed out a 16th floor penthouse window in her pajamas in order to escape a violent fight with her husband. The story came out after James Varian, a NYPD detective on the case, interviewed Durst’s neighbors after McCormack’s disappearance. It was reported that McCormack scaled the building to bang on her neighbor’s window in late September or early October 1981. When the neighbor confronted Durst over the fight, he claimed he was not mad and wanted McCormack to return home.

McCormack had been seeking a divorce and reportedly told her divorce attorney that her husband had threatened to kill her. The same police officer that reported the conversation with the divorce attorney reported that he spoke to a doctor at a Bronx hospital who told him that McCormack had been treated for abrasions to her face 2 weeks before the disappearance. No police report was filed at that time.

Durst denied hitting his wife and claimed she made the stories up to increase a possible settlement in the divorce. Friends also say they never saw McCormack with injuries but that it was clear that McCormack distrusted her husband.

5. Her Family Believes She Was Killed

The questionable circumstances surrounding my sister’s disappearance and her husband’s behavior and reactions following this event strongly suggest that my sister may have been murdered, and that Robert Durst is either directly responsible for her death or privy to information concerning her disappearance.

Some of the circumstances around the investigation seemed odd to Hughes, including the fact that Durst had refused to take a lie detector test and disposed of his wife’s possessions quickly. Durst denied the facts in his own affidavit, stating that he had disclosed all information about his wife’s disappearance to the police and her family.

When police told the family they’d be taking another look at the case, the family was happy, stating that the issues around the disappearance have been “just below the surface” for 20 years. 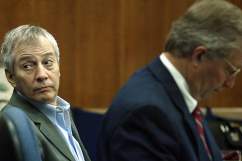