Robert Durst, the subject of an HBO documentary mini-series about his alleged involvement in three murders, has been arrested in Louisiana on a warrant out of Los Angeles charging him with murder, KTRK-TV, a Houston news station, reported Sunday morning.

The HBO documentary, The Jinx: The Life and Deaths of Robert Durst, investigated Durst’s connection to the unsolved killing of his friend, Susan Berman. She was killed execution-style in Los Angeles in 2000. Durst cooperated with filmmakers Andrew Jarecki and Marc Smerling.

1. He Was Arrested Saturday Night

According to the KTRK report, Durst is being held on a first-degree warrant out of Los Angeles County by the Orleans Parish Sheriff’s Office. He was arrested at about 11 p.m. Saturday at the JW Marriott Hotel in New Orleans.

Durst’s attorney, Chip Lewis, tells the news station that Durst will not fight extradition to California and hopes to appear before a magistrate judge Monday. Lewis said they will fight the charges in Los Angeles.

Details of the case weren’t immediately released, but Durst has been previously connected to the 2000 killing of Susan Berman, his confidant.

Durst was questioned, but not charged, in the brutal murder of Berman, who was found dead of a gunshot wound in her Benedict Canyon, California house in 2003. According to USA Today, police planned to question Berman about her knowledge of the disappearance of Durst’s wife before she was killed.

Durst was questioned in the disappearance of his wife, Kathleen McCormack Durst, who went missing in 1982 from their Westchester County, New York home, but was never charged in that case. He has denied any knowledge of what happened to Kathleen, who has been declared dead.

According to the New York Post, Durst moved to Texas in 2000 and began cross-dressing to avoid being questioned about his wife.

A jury found Durst not guilty of killing his Texas neighbor, Morris Black, whose body was found dismembered in Galveston Bay. Durst claimed self-defense in Black’s death, but did admit to using knives and an axe to dismember Black’s body before he dumped it into the bay.

Durst was convicted of two counts of bond jumping and one count of evidence tampering and sentenced to serve three years in prison. He was paroled in 2005. He returned to prison in 2006 after violating the terms of his parole and was released in 2006. He was arrested a third time in 2014 after he allegedly exposed himself at a Houston CVS pharmacy and then urinated on candy, according to USA Today. He is awaiting trial in that case.

4. The Documentary Uncovered New Evidence in the Berman Case

The final of six episodes of the HBO documentary series is scheduled to air Sunday night. It began in February.

The show uncovered new evidence in the Susan Berman case, which led to speculation that Durst could be charged in connection with her killing.

In the documentary’s fifth episode, Berman’s stepson found an unopened letter from Durst to Berman from 1999. The letter appears to be similar in style to an anonymous letter sent to the Beverly Hills Police Department in 2000 notifying them of a cadaver at Berman’s home.

Berman, a journalist who wrote a book about her life as a mobster’s daughter, served as a spokesman with the media for Durst after his wife’s disappearance. Police in New York had contacted her to talk to them about Kathleen Durst’s death after the case was reopened in 2000.

After the documentary put Durst back into the national spotlight, the Los Angeles County Prosecutor’s office re-opened the investigation into Berman’s death, according to the New York Times.

The handwritten letter found by Berman’s stepson was handed over to investigators. 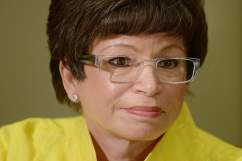 Loading more stories
wpDiscuz
0
0
Would love your thoughts, please comment.x
()
x
| Reply
Robert Durst, the subject of a HBO documentary miniseries about his suspected involvement in three murders, has been arrested on a felony warrant in Louisiana.