Getty Johnny Hallyday and his wife Laeticia pictured together in 2014.

Rather than settling for being one of the most beautiful women in the world and being married to one of the most successful recording artists of all time, Johnny Hallyday’s wife dedicated her life to helping orphans from the world’s poorest regions. It was Laeticia Hallyday, 42, who broke the news to the world that her husband of 21 years had died of lung cancer on December 6 at the age of 74. The French President Emmanuel Macron paid tribute to Johnny saying the singer “transcended generations and is etched in the memory of every Frenchman.” The singer had announced in March 2017 that he was being treated for the disease.

Johnny married Laeticia in March 1996. At the time, Laeticia was 21 years old. The couple had two daughters together, both adopted from Vietnam, Jade Odette Desiree, 13, and Joy, 9. In announcing his passing, Laeticia told the AFP, “Johnny Hallyday has left us. I write these words without believing them. But yet, it’s true. My man is no longer with us. He left us tonight as he lived his whole life, with courage and dignity.”

Laeticia added, “My man is no more. The father of our two little girls, Jade and Joy, is gone. Laura’s dad and David closed his eyes. His blue eyes will illuminate our home and our souls again and again. Today, out of respect and love for this extraordinary man who was mine for more than 22 years, to perpetuate his passion for life, thrills, emotions without half measure, we unite all our prayers, and our hearts. Johnny was a man out of the ordinary. It will remain so thanks to you. Above all, do not forget it. He is and will remain with us forever. My love, I love you so much.”

1. The Couple Met Through Her Father, Who Was a Friend of Johnny’s

According to her Gala profile, Laeticia met Johnny through her father, French businessman Andre Boudou. Her father had relocated from France to Miami following his divorce from Laeticia’s mother, Francoise Thibaut. Boudou was joined in Florida by his daughter while he ran the Amnesia nightclub. Laeticia was trying to make it as a model when she met Johnny in France. The profile describes their meeting as “love at first sight.”

On her IMDb page, it’s described that Laeticia has always had a passion for fashion and aspired to be a model. Laeticia has acted in small roles in a number of French movies. The profile describes her has being a close friend of actress Mathilde Seigner, who is Roman Polanski’s sister-in-law.

Johnny told Les Echos in an interview that the pair met in a Japanese restaurant in Miami in 1995. The singer added, “She protects me. I have my vices but I need her. She brings me what others have never been able to give me.”

2. Laeticia Has Confessed in the Past to Suffering ‘Many Miscarriages’ as Well as Battling Depression & Anorexia

In a January 2013 interview with Pure People, Laeticia talked about suffering from anorexia and depression. Laeticia told the website that she lurched into anorexia because she had “no more self-esteem.” Laeticia believed that her anorexia contributed to her “many miscarriages.” She said, “Anorexia is probably responsible for my infertility. I have been pregnant many times. I lost my last child at 4 and a half months of pregnancy.”

GettyThe couple pictured together in February 2015 in Beverly Hills.

The couple adopted their first child, Jade, in November 2004, and in 2008, they welcomed, Joy. According to her official website, Laeticia has done work for Unicef in Senegal, Vietnam, Burkina Faso and Mozambique. In 2006, the couple sang a duet of John Lennon’s “Imagine” that was released to aid Unicef. On her Instagram and Twitter4$ page bios, Laeticia writes, “I want to make beautiful things, even if nobody cares. It’s the way I want to live my life.”

Johnny was asked about the adoptions by the Guardian in 2012, “It’s a long story. My wife wanted to have some children and she could not have any. So she tried desperately for maybe 10 years and then couldn’t get any. So we decided to adopt. We have two marvellous little girls from Vietnam and we’re very happy with them. It’s great – they are so tender, they need so much love and we have much love to give. I don’t see any difference between my real children and my adopted children.”

In 2007, Johnny and Laeticia moved to Switzerland to avoid France’s tax-trate. Despite saying they would return upon the election of conservative Nicolas Sarkozy, the family spent most of their time in Los Angeles.

Johnny was asked about Nicholas Sarkozy by the Guardian, Johnny replied, “He’s a friend of mine. I cannot say anything against him. I like the man very much but that has nothing to do with political respect. I’ve known Carla [Bruni-Sarkozy] for a long time – from before I met Sarkozy. I used to know her when she was a model.”

GettyJohnny and Laeticia pictured in 1996 shortly after their marriage.

Laeticia told Paris Match in November 2015 interview that “Johnny’s infidelity helped me a lot.” She explained that Johnny’s cheating occurred before 2009, when the singer was diagnosed with colon cancer and was put in a medically induced coma. Laeticia told the magazine:

I was so restrained during the first years of our marriage … I was young, in love, guided by people who were not necessarily good … I was not free. His unfaithfulness finally helped me a lot. I would even today tend to say thank you. [She laughs.] It made me question myself, to be much more feminine, again seducing with him.

A friend of the couple, Gilles Lhote, told Gala, Laeticia “saved [Johnny’s] life several times. She was always there.” Lhote added that Laeticia had become her husband’s artistic director during his later career, Lhote says, ” Laeticia is essential in the development of Johnny’s career, she is the absolute artistic director, she knows how far her husband’s image is, she knows how to beautify her.” (…) Today, Laeticia has 30 years of history with the character. It often knows better than him what he is capable.”

In the infamous Paris Match interview, Laeticia was asked, “Why did Johnny hold on?” She responded, “I can not answer for him. We are a couple who dialogue. What brings us together is our unsinkable love, whatever happens.” Laeticia said that the couple could have “separated a thousand times” “But it’s the 2009 fight to save us that changed everything.”

4. Johnny’s ‘Tempestuous Love Life Made Him a Permanent Headline in the French Popular Press’

The New York Times wrote in their obituary to Johnny that his, “His hard drinking, car crashes, wild partying and tempestuous love life made him a permanent headline in the French popular press.” The tribute hits particularly on his long-term marriage to actress Sylvie Vartan. A relationship so vexed, it caused Johnny to attempt to suicide on two separate occasions, once in 1966, the Times says. In total, Johnny was married five times, twice to the same woman.

In addition to his daughters with Laeticia, Johnny is also survived by his son, David, from his marriage to Sylvie Vartan. As well as a daughter, Laura, from a four-year relationship with actress Nathalie Baye. When asked about Johnny’s deepest faults by Paris Match, Laeticia said, “His demons, alcohol, drugs, who can always come back. Even if he knew how to get rid of it. But his biggest fault is his relationship with his father, which is not repairable, it is a violent scar that has never calmed down. I notice that he is now able to talk about it. For a long time he refused to formulate his problems, his moods. Johnny has never been a great communicator, he is so awkward … [She laughs] But that’s what makes her charming!”

5. Some of the World’s Most Famous Musicians & Celebrities Have Been Mourning Johnny Hallyday

French Elvis: Rock icon Johnny Hallyday dies at 74Rock ‘n' roll fans in France are mourning a national pop legend often compared to Elvis Presley. Johnny Hallyday died from lung cancer aged 74. When Elvis Presley burst into the US music scene in 1957, Johnny found his idol and a template for his own career. He hit the road as a teenage singer,…2017-12-06T11:08:00.000Z

In the wake of Johnny’s death, some of the world’s most famous musicians have taken to their respective social media’s to pay tribute the “French Elvis.” Here are some of the most poignant messages:

Farewell Dear @JohnnySjh. Your friendship, sweetness and support are imprinted in my heart. It is an honor to have known you and to have spent time with you and your beautiful family. Your soul is pure Rock and Roll. Repose en paix. ?: @candyTman pic.twitter.com/1ZAFUewHlo

I'm very sad to hear the news that Johnny Hallyday passed away. He was a giant in show business…a true icon! My thoughts go out to his family, his loved ones, and to the millions of fans who adored him for many decades.He will be sadly missed, but never forgotten.- Céline xx…

Goodbye to my friend…@JohnnySjh … we will miss you pal..Thanks for all you gave us…

I'm just gutted to hear Johnny Hallyday has died. He was a loyal friend and lovely, fearless performer and he will be missed by millions. My heart goes out to his family and friends today. RIP JoJo and thank you for all the music.

R.I.P. JOHNNY HALLYDAY, aka the French Elvis, whose cover of "The House of the Rising Sun" always gave me chills… https://t.co/yQuPLAeQOR 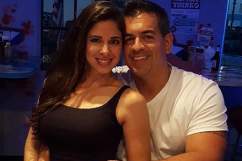 Read More
5 Fast Facts, Breaking News, Celebrities, Music
Rather than settling for being one of the most beautiful women in the world and being married to one of the most successful recording artists of all time, Johnny Hallyday's wife dedicated her life to helping orphans from the world's poorest regions.