Getty Paul Getty III being interviewed by the press on leaving a police station following the arrest of the men responsible for kidnapping him.

The Getty family’s real-life story is one of tragedy, drug use, emotional abandonment, misfortune, and, yes, a notorious kidnapping that resulted in a severed ear. (Warning: As the movie closely follows real life, there are some spoilers ahead.)

In the new Hollywood film, All the Money in the World, John Paul Getty III (known as Paul Getty) is kidnapped by a ring of Italian criminals. He’s the grandson of the extremely wealthy, shrewd but emotionally distant John Paul Getty, a man who felt more comfortable with objects than he did with fellow human beings (luckily for the Getty Museum that bears his name and was built on his legendary art collection.)

In real life, John Paul Getty III was actually kidnapped by an Italian crime ring and held for ransom. When his grandfather, who was indeed the richest man in the world, refused to pay the ransom, the kidnappers sliced off one of Getty III’s ears and sent it to the family. The movie, of course, is also noteworthy because it features Christopher Plummer taking over the titular role from Kevin Spacey. Plummer completed filing in record time after Spacey was accused of sexual misconduct. Plummer so seamlessly occupies the persona of John Paul Getty Sr. that it’s a wonder any other actor was ever considered for the role (Plummer was still filming scenes for the movie through early December 2017).

The movie’s plot is so fantastical that it has a lot of viewers wondering what is real and what is not in the movie. Furthermore, what happened to J. Paul Getty III after the kidnapping? Unfortunately, the true story of Paul Getty is one that gets even sadder after his rescue.

Although he survived the notorious abduction, John Paul Getty III died at age 54 in 2011 in his home in London, England. According to The New York Times, his life took more troubled turns; he overdosed on drugs at age 24, which led to a stroke and left him in a wheelchair, partly blind, and mute for the rest of his life. He was 16 when he was, in fact, kidnapped in Rome. “The ordeal, coupled with terrible neglect, ruined the boy’s life,” The New York Post reported.

“Years later, the one-eared J. Paul III suffered a stroke after heavy drug use in New York which left him paralyzed and nearly blind for the rest of his life,” Forbes reported. Forbes estimates that the Getty family is still worth about $5 billion, a fortune accumulated in oil. Getty Oil “was ultimately absorbed by Texaco in 1984 and today is probably part of Chevron,” reports Forbes.

Paul Getty, the grandson in the movie, is the father of the actor Balthazar Getty. Paul Getty died as a father of two and grandfather of six, and his son memorialized him in The Los Angeles Times by saying that his father had “taught us how to live our lives and overcome obstacles and extreme adversity and we shall miss him dearly.” Although he’d once charmed his grandfather, John Paul Getty III’s relationship with the elder Getty fractured after the kidnapping.

“A year after his release, at age 18, Getty married Martine Zacher, who was six years his senior. His grandfather disapproved of his marrying so young and disinherited him. When the senior Getty died in 1976, he left $500 to his son and nothing to his grandson,” The LA Times reported. Getty moved to Los Angeles “and studied for one semester at Pepperdine University in Malibu. He underwent a series of operations to reconstruct his ear. However, he was also addicted to drugs and alcohol, which led to a near-fatal stroke in 1981,” according to The Los Angeles Times.

Getty’s mother, Gail, had to sue his father to get money for Paul Getty’s medical care after the overdose. “For the rest of his life, unable even to enunciate his own name, he had to be spoon-fed, dressed, bathed and cared for around the clock by his mother, Gail, and a team of carers,” The Telegraph recounted. “With only peripheral vision, Getty had problems communicating, and could emit only a high-pitched scream.” Rehabilitation eventually allowed him to attend the movie theater, concerts, and even to ski, the site reports.

Many of the plot twists in the movie actually happened. For example, it’s true that when the elder Getty eventually agreed to pay ransom, he did so only because it was tax deductible, the Times reported. Upon hearing that his grandson Paul had been kidnapped, he said, “I have 14 other grandchildren. If I pay one penny now, then I’ll have 14 kidnapped grandchildren.” The elder “John had five wives and as many sons. He particularly disdained his third boy, John Paul Getty Jr., and viewed him as a dope-addled hippie,” reported The New York Post. In real life, the kidnappers were “part of a ragtag group that included Mafia members, a carpenter and a hospital orderly,” according to The Post.

The movie All the Money in the World was written by David Scarpa and is based on the 1995 book by John Pearson called Painfully Rich: The Outrageous Fortune and Misfortunes of the Heirs of J. Paul Getty. In real life, at the age of 16, John Paul Getty III – known as Paul Getty – “had become somewhat of a fringe celebrity while living in Rome, thanks to his last name,” Vanity Fair reports. “The teenager—who had dropped out of formal schooling, dressed in bohemian clothing, and wore long, curly hair—had been nicknamed ‘the Golden Hippie’ by the press.” Some aspects of the movie are fictionalized, Vanity Fair reports, including Getty’s escape.

It’s true that Paul’s father was drug-addled and a backseat player in dealing with his son’s kidnapping. It’s also true that his mother, Gail, who didn’t have the money to afford the initial $17 million ransom demand, stepped up to try to get the money from the grandfather. According to Vanity Fair, it’s also true that the elder Getty lived an isolated life in his English mansion and was so tightfisted with money that he kept a pay phone for visitors to use so he wouldn’t have to shell out any money for their calls. There was indeed a sympathetic kidnapper named Cinquanta, according to Vanity Fair. Mark Wahlberg’s former CIA agent/Getty security man was also based on a real character, although aspects of his behavior were left out.

If anything, though, considering what happened to Paul Getty after the abduction, the movie understates the tragic nature of the Getty fortune and family. 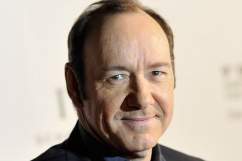 WATCH: All the Money in the World Kevin Spacey Trailer