Anime can be a difficult medium to get into as there are hundreds upon hundreds of different shows, spanning almost every genre imaginable. This makes finding a good starting area tricky, especially since some shows can have a tricky mythology, unique art style, or hundreds of episodes.

For this list, we focused on the quality and ease of enjoyment that a series can bring. Whether they’re in Japanese or dubbed in another language we will not factor this into our decision. Additionally, the genre or age rating for the show will not matter, as we are simply looking for the best anime for beginners. Obviously, these are simply suggestions and you should always take into account your own personal preferences. But first, here are some honorable mentions:

If you are totally new to anime or just looking for an easy series to enjoy then here are our suggestions.

Soul Eater is a fantasy/action anime where students train under the Grim Reaper to kill demonic beings known as Kishin. The students are divided into Weapons and Meisters, with the former being students who can literally turn into a weapon and the latter are those trained to wield them. This show follows a group of exceptional students that not only have to grow as hunters but face increasingly more dangerous foes.

Where this show thrives is not only in its rich and fascinating world but the fun characters that inhabit it. There are tons of callbacks, references, and nods to popular historical and mythological figures like Al Capone, Jack the Ripper, and Medusa. Sporting 51 episodes, viewers will find everything from humor to drama to some fantastic action sequences. This was the first anime I ever watched and it’s a fantastic way to break into the medium

Perhaps the most well-known anime on our list, Cowboy Bebop is considered by many to be the best anime ever released. Set in the far future, Bebop follows a crew of bounty hunters that hunt down various targets across the galaxy. Bebop is a fairly short show, but every episode oozes with personality, style, and memorable moments.

The show has some overarching plot threads, but it also embraces a serial style of storytelling. Most episodes can stand on their own without any prior knowledge needed outside of who the main cast is. This makes Cowboy Bebop a fantastic entry point as users can come and go as they please. As an added bonus, Cowboy Bebop’s music is undoubtedly some of the best that’s ever graced television.

One of Netflix’s newest anime also clocks in at a grand total of four half-hour episodes. Following the opening moments of this legendary video game series, Castlevania wastes no time introducing its core cast. Despite the incredibly short first season, the sheer level of quality in both production and writing is astounding. It’s hard not to fall in love with this world, even if you are unfamiliar with the source material. This is an absolutely perfect start for those not wanting to commit to a full series, but still want to try an anime. Keep in mind this is a pretty brutal anime and is certainly not for the faint of heart.

Looking for something on the funny side? Assassination Classroom follows a class of low performing students that are tasked with killing a powerful alien by the end of their school year. If they fail then the alien will blow up the Earth and everyone on it. The catch? This all-powerful alien has volunteered to teach these would be assassins how to kill him.

It’s as perfectly ridiculous as it sounds and that’s the best part of it. This anime leans into the humor and delivers some truly hilarious moments and episodes. This is all backed by some truly terrific voice work and writing that fleshes out the characters. You might find it hard not to shed a tear or two by the end of the series.

One of the most popular anime of the last few years, Attack on Titan follows the last remnants of humanity that are constantly under siege by man-eating giants called Titans. The mains tory follows a young man named Eren who is on a mission to slay all of the Titans and seek revenge for the death of his mother.

Attack on Titan is a violent, dark anime that delivers a ton of thrills and tense moments that other shows try to replicate. It’s hard not to get invested in the character’s personal struggles, which can make certain deaths really hit home. This is a wonderful anime for those looking for a bit more action and a much darker show. Just don’t get attached to anyone, Attack on Titan has a habit of a killing off a lot of different characters.

Speaking of dark, Death Parade follows a group of individuals who are tasked with deciding if the dead get to reincarnate or go to the underworld. This is done through various games designed to show a person’s true colors and emotions. Don’t expect a ton of action in this title as it’s very much a character drama that aims to explore the nature of humanity.

By doing this, Death Parade is allowed more breathing room to flesh out its own lore, characters, and the themes it embraces. Death Parade is a fairly easy, if not serious anime to get into. The series only runs 12 episodes long, so it’s perfect for newbies looking for something less chaotic.

It’s hard to not talk about anime and ignore one of the most popular series to ever exist. Fullmetal Alchemist: Brotherhood is set in a world where alchemy is real and it’s used by the military to maintain control. The story follows two brothers who attempted to use alchemy, but only ended up severely injuring their bodies. Now attempting to reclaim what was lost to them, they must navigate the treacherous world full of nefarious villains and dangerous international conflicts.

Brotherhood is a fantastic anime from top to bottom, sporting some of the best English dubbed voice work in the medium. The show also sports some great action scenes and memorable characters that help drive the story forward. This is a show that shouldn’t be passed up, especially if you are new to anime.

If you are want something that’s not action oriented then consider giving Yuri On Ice a try. The plot follows two young men, both named Yuri, who quickly rise through the ranks in the figure skating world. Driven to compete against one another in the Grand Prix Finals, both men vow to claim the top spot. It’s hard not to fall in love with Yuri On Ice as the characters are exceptionally well written, making it hard not to fall in love with them. Plus the animation is gorgeous and the story is quite engaging. With only 12 episodes, this is a good start for those looking for a solid drama or sport focused anime.

Another wildly popular anime, Death Note is a dark and twisted tale that oozes with tension.The story follows a young honor’s student, Light,  who discovers a magic notebook that kills anyone whose name is written in it. Driven by a sense of righteous justice, this student begins to cleanse the world of criminals in order to construct a perfect society. However, this draws the eye of a mysterious investigator who plunges Light into an intricate game of cat and mouse.

Death Note’s story is the real star here, as the plot weaves together numerous twists that will keep you on the edge of your seat. It also sports a solid cast of characters and an interesting mythos that never gets to heavyhanded. Do yourself a favor and check this anime out, but we recommend you skip the Netflix’s live-action version.

Okay, we are cheating here, but this film trilogy is absolutely worth it. Condensing the core television show into three 90 minute movies, the Golden Arc films is a perfect way to begin your journey into the world of anime. The plot follows a powerful swordsman known as Guts who joins a band of famous mercenaries that have lofty ambitions.

With three films, the Golden Arc Trilogy does a great job of easing viewers into the world and its lore. Characters are memorable, with many of them shedding the typical fantasy tropes you’d expect in this genre. The action is fast and bloody, as Berserk refuses to pull its punches when it comes to depicting the horrors of war. Do not let anyone spoil the ending for you as it’s one of the most captivating and iconic moments in anime. 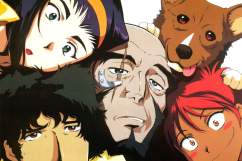