Adult film star Stormy Daniels, whose real name is Stephanie Clifford, has alleged that she had sexual encounters with Donald Trump in 2006 and 2007, while he was married to wife Melania Trump. Tonight, she speaks with Anderson Cooper about the alleged affairs on 60 Minutes, in her first television interview about the reports. In the past, Daniels has been married a couple of times and her ex-husband Mike Moz was actually involved in the allegations Daniels has made. Get to know more about Daniels’ marriage to Mike Moz, his connection to the Trump scandal and more information below.

2. Daniels Allegedly Told TheDirty.com that Moz Accompanied Her to One of Her Meet-Ups with Trump

In 2011, Nik Richie’s website reported that Daniels notified them of an affair she’d allegedly had with Donald Trump. Recently, TheDirty.com expanded on this with details from an email that Daniels reportedly sent Richie. In the email, Trump’s penis is even described.

Moz was actually included in the email, as being present at a couple of Daniels’ alleged encounters with Trump. The Dirty quoted Daniels’ email, writing, “Trump said he’d call and he did many times and always from a blocked number/I’d put him on speaker phone (in front of Moz and once in front of a photographer) … July 2007 he had me come meet him at the Beverly Hills Hotel/Moz drove me and his bodyguard walked me to his bungalow and back out to my car/We had dinner in his bungalow/He wanted sex.”

3. Mike Moz Actually Set Up a Polygraph Test About the Trump Scandal

I'm no angel…but neither are you. 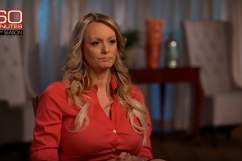 4. Daniels Was Charged With a Domestic Violence Misdemeanor Against Moz

For everyone asking for better shot of my tattoo ;)

Cheat Sheet has reported that Daniels was charged with a domestic violence misdemeanor after she reportedly “threw a potted plant at Moz (which hit him), destroyed their wedding album, and trashed other property.” The couple broke up shortly after the incident, according to The Huffington Post. The Tampa Bay police report stated that Daniels “told cops that she did not intentionally hit her husband, but acknowledged tossing a potted plant in the kitchen sink, throwing the couple’s wedding album on the floor, and breaking some candles.”

In 2011, Daniels sought out a restraining order against Moz, claiming he tried to attack her when she was with her then-fiance, Crain, on a red carpet. She also claimed that Moz had tried to steal her car and threatened Crain’s employer, which allegedly resulted in Crain’s firing from his job, according to TMZ.