Just about everyone on Twitter is wondering who bit Beyonce after actress Tiffany Haddish’s interview with GQ Magazine went viral. Haddish, best-known for her role in Girl’s Trip, told the outlet a story about the time she attended a party with Beyonce and a “well-known actress” allegedly bit the “Single Ladies” singer in the face.

The party was held after a Jay Z concert back in December. At the time, Haddish had just met Beyonce. The two women even posed for a selfie that Haddish shared on Instagram. If you look at the photo on Instagram, you’ll see quite a few comments asking “who bit Beyonce?” and even some wondering if Bey was hiding behind Haddish in an effort to conceal bite marks.

You can check out the selfie below.

@beyonce was telling me that my wig was slipping…. ? But for real she told me to have fun and I DID! #SHEREADY #thelastblackunicorn #beyonce

“There was this actress there that’s just, like, doing the mostest … She bit Beyoncé in the face,” Haddish told GQ, but refused to name the actress.

“So Beyoncé stormed away, went up to Jay-Z, and was like, ‘Jay! Come here! This b*tch—’ and snatched him. They went to the back of the room. I was like, ‘What just happened?’ And Beyoncé’s friend walked up and was like, ‘Can you believe this b*tch just bit Beyoncé?'” Haddish continued.

A little later on in the night, Haddish approached Beyonce.

Since Haddish did not out the actress involved in this face-biting incident, the internet has been going crazy, hoping that the name of the actress is revealed.

Beyonce hasn’t spoken out about this incident and her rep refused to comment, telling various outlets that she doesn’t know anything about this story. However, many seem to think that Beyonce referenced the incident that occurred at her husband’s party in the song “Top Off.”

“If they’re tryna party with the queen, they gon’ have to sign a non-disclosure,” the lyrics read, in part. According to Vanity Fair, this may have been in direct reference to Haddish and what she witnessed at that party. Haddish has since said that she absolutely would sign an NDA for Beyonce.

Check out her tweet in response to the song below.

I Love Beyonce part! Everything she said rang so real to me. Just know I will sign A NDA any day For Beyoncé. DJ Khaled – Top Off (Ft. JAY Z, Future & Beyonce) https://t.co/9Ing2kNq14 via @YouTube

Before her interview with GQ was published, Haddish had only mentioned that the actress “touched Jay-Z’s chest” and this clearly made Beyonce upset. Now, there is a lot more to what Haddish claims she saw/heard at this party — and the internet simply can’t get enough.

Below are some of the funnies memes posted by curious Twitter users.

So does anyone know who bit Beyoncé’s face? pic.twitter.com/Ryy7vmrOmV

When the girl who bit Beyonce's face finds out she is trending because Tiffany Haddish can't keep quiet pic.twitter.com/JCjPyZ1udJ

I can’t believe Tiffany Haddish is out here spilling Beyoncé’s Tea.. but anyway who tf bit my Fave!! pic.twitter.com/XfabMWuvn0

@Beyonce queen tell usss who bit you in the face. We need to know and we are ready to sting a bish. At least give us initials and solange number pic.twitter.com/5IwHFXlcMu

I won’t rest until I find out who bit Beyoncé pic.twitter.com/buCzLRjRFD 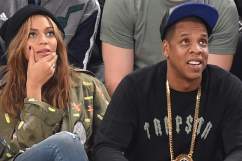