The Duchess of Cambridge has welcomed a baby boy. Earlier this morning, Kate Middleton and her husband, Prince William, arrived at St. Mary’s Hospital. Hundreds of cameras have been set up outside the hospital’s Lindo Wing, waiting to see the new royal baby for the very first time — and that happened a short while ago.

Keeping up with tradition, the Duke and Duchess walked out the door, onto the stoop, and down the stairs with their newborn, greeting the crowd and officially announcing the child’s birth.

Below is the tweet that was sent out by Kensington Palace, announcing that Middleton was in the “early stages of labor.”

Her Royal Highness The Duchess of Cambridge was admitted to St. Mary’s Hospital, Paddington, London earlier this morning in the early stages of labour.

The Duchess travelled by car from Kensington Palace to the Lindo Wing at St. Mary’s Hospital with The Duke of Cambridge.

A few hours later, the palace confirmed that the couple had welcomed a baby boy.

The royal couple welcomed their son, Prince George, on July 22, 2013, and their daughter, Princess Charlotte, on May 2, 2015. Both children were born at St. Mary’s Hospital. Shortly after the Duchess gave birth to both George and Charlotte, the couple was visited by some family members. After Princess Charlotte was born, Prince William brought his son, Prince George, to the hospital to meet his new baby sister. It is presumed that both George and Charlotte will arrive at the hospital this afternoon to meet their new sibling.

After spending some time with visitors (likely including Middleton’s parents), the Duke and Duchess are expected to present their new baby to the world. Previously, the Duchess of Cambridge had her stylist on-hand to help with her hair and makeup before she stepped outside. This will likely be the case today as well.

After they greet the public, the Duke and Duchess will more than likely head back to Kensington Palace. In the past, Prince William has carried the carseat and installed it in the vehicle before driving away from St. Mary’s Hospital. Today should be no different.

At this time, the gender of the royal couple’s third child is unknown. It is also unknown what the couple will settle on for the child’s name. According to oddsmakers, the most popular names for a girl are Alice and Victoria. The most popular names for a boy are Arthur and Henry. Of course, the royal baby will be given three names, just like his or her older siblings (George Alexander Louis and Charlotte Elizabeth Diana).

On September 4, 2017, Kensington Palace confirmed that the Duchess was pregnant with her third child. At the time, it was believed that she was about two months into her pregnancy, putting her due date some time in April. An exact date was not confirmed by the palace, however.

Last month, Hello Magazine reported that the Duchess was due on April 23, St. George’s Day.

Not unlike her previous pregnancies, the Duchess suffered from Hyperemesis Gravidarum, which is severe morning sickness. After taking a couple of weeks to rest, however, she was feeling well enough to resume her royal duties. Over the past few months, the Duchess of Cambridge has made several public appearances, visited numerous places, and even gave a few speeches.

Next month, the royal family of five will be present at the wedding of Prince William’s brother, Prince Harry, and his bride-to-be, Meghan Markle. The two will exchange vows at St George’s Chapel inside Windsor Castle on Saturday, May 19. The wedding will be televised all over the world. 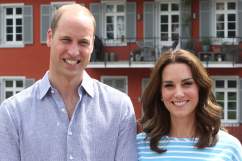