Joe Jackson, well-known talent manager, has died. He is survived by his wife, Katherine Jackson, whom he married on November 5, 1949.

Katherine was born Kattie B. Screws on May 4, 1930, in Barbour County, Alabama. According to Biography, Katherine came down with polio when she was just 2 years old. The disease left her “with a life long limp.” Her dad, Prince Albert, changed her name from Kattie to Katherine when she was 4. That same year, her family moved to Indiana, where she spent much of her childhood.

Katherine met Joe when she was very young and the two tied the knot when she was just 19. The couple had 10 children together, many of whom have had successful careers in the entertainment industry. Their son, iconic pop star Michael Jackson, died in 2009

Katherine is a mother of 10 children. Being a mother is one of Katherine Jackson’s most important roles.

“[It’s] the most important thing in the world. One thing about mothers — they have to really be there for their children when they need her. They should be there at all times and know where your children are at all times. You must make your ‘yes’ mean ‘yes’ and let your ‘no’ mean ‘no.’ That’s really the way to bring your children up. It’s the mother who holds the family together… she’s the glue that keeps the family going,” she told CNN back in 2011.

Maureen Reillette “Rebbie” Jackson was born on May 29, 1950. Rebbie is a singer with four albums credited to her name. She is a mother of three children, Stacee, Yashi, and son Austin. Her husband, Nathaniel Brown, died of cancer on January 6, 2013.

Sigmund Esco “Jackie” Jackson was born on May 4, 1951. Jackie was part of the Jackson 5. He currently lives in Las Vegas with his third wife, Emily Besselink, and their twin boys, whom they welcomed in 2013.

Toriano Adaryll “Tito” Jackson was born on October 15, 1953. Tito was part of the Jackson 5 and the Jacksons. His solo career took off in 2003. He and his late ex-wife, Dee Dee Martes, welcomed three sons together, Toriano Adaryll “Taj” Jackson, Jr, Taryll Adren Jackson, and Tito Joe “T.J.” Jackson. Martes was found dead in a swimming pool in 1994, six years after she and Tito Jackson divorced. A man named Donald Bohana was charged and convicted of second degree murder, according to OK Magazine.

Jermaine La Jaune Jackson was born on December 11, 1954. Jermaine is a singer and a songwriter, who was also a member of the Jackson 5. He has been married three times and he has seven children. He was particularly close to his brother, Michael Jackson, who died in 2009.

La Toya Yvonne Jackson was born on May 29, 1956. La Toya is a singer, songwriter, and an actress. She has released nine studio albums over the course of her career.

Marlon David Jackson was born on March 12, 1957. Marlon was a member of the Jackson 5. He’s known as “The Dancing Machine.” He and his wife, Carol Ann Parker, got married when they were teenagers. They have three children, Valencia, Brittany, and Marlon Jr.

Brandon Jackson was born on March 12, 1957 and died one day after his birth.

Michael Joseph Jackson was born on August 29, 1958 and died on June 25, 2009. Michael was known as the “King of Pop.” He was an iconic performer who seemed successful in everything he did.

“Record sales consistently orbited, culminating in the biggest-selling album of all time, ‘Thriller’ in 1982. A TV natural, he ventured rather uneasily into films, such as playing the Scarecrow in The Wiz (1978), but had much better luck with elaborate music videos,” reads his IMDb bio.

Steven Randall “Randy” Jackson was born on October 29, 1961. Steven was a member of the The Jacksons. He has had a few challenges in life involving his ex-wife, Eliza Shaffy. He also filed for bankruptcy in 1996, and later pleaded guilty to bankruptcy fraud, according to the Los Angeles Times.

Janet Damita Jo Jackson was born on May 16, 1966. Janet is the youngest child of Joe and Katherine Jackson. She has had a very successful career as a singer, songwriter, dancer, and actress. She has released 11 albums over the course of her career. The most recent, titled Unbreakable, was released in 2015, after a seven year hiatus. In January 2017, Janet gave birth to her first child, a son she named Eissa Al Mana, according to Us Weekly. At the time, Janet was 50 years old.

His death was later ruled a homicide and his personal doctor, Conrad Murray, was charged with involuntary manslaughter in 2010. Murray told police that he administered 25 mg of propofol intravenously, to help Michael Jackson with his insomnia, on the night of his tragic death.

In September 2011, Murray’s trial began, and two months later, he was convicted. He was sentenced to four years in prison and had his Texas medical license revoked. He was released on parole on October 28, 2013.

Katherine Jackson and Michael’s three children, Prince, Paris and Blanket, filed a joint lawsuit against AEG Live LLC in 2010, according to ABC News.

The Jackson family claimed “that the company was negligent in hiring Murray to tend to the singer.” In October 2013, the jury ruled in favor of AEG.

3. She Was Granted Temporary Guardianship of Her Son Michael’s 3 Children After His Death & Currently Shares Custody With Her Grandson, T.J.

Katherine Jackson and Debbie Rowe reached an agreement in which Rowe was granted rights to supervised visitations with her kids.

Katherine Jackson made headlines in 2012, when a member of her family reported that she had gone missing. However, it was later learned that Katherine had simply gone on a trip to Arizona. Nonetheless, her “disappearance” caused a judge to suspend her guardianship of MJ’s three kids, albeit temporarily.

“Before Katherine’s location could be confirmed, speculation quickly grew regarding her whereabouts, with Paris, Prince and Blanket becoming worried that they were possibly being prevented from communicating with their grandmother by other family members. Exacerbating the paranoia, Katherine Jackson’s ‘disappearance’ came shortly after a dispute between her and several members of the Jackson clan — including singer Janet Jackson — who raised questions about the validity of Michael Jackson’s will, pointing fingers at the Jackson matriarch and calling for the executors of his estate to resign,” according to Biography.

“It’s clear that the kids love Mrs. Jackson and they are very well taken care of. They also love T.J. Jackson, and Mrs. Jackson is doing a terrific job with the children,” Judge Beckloff said at the time, according to Us Weekly.

This past November, Katherine Jackson resigned as Blanket’s co-guardian, leaving T.J. as Blanket’s sole guardian. Michael Jackson’s other two children, Paris and Prince, were both over age 18 at that time.

“Katherine is no longer needed to fulfill the duties that were necessary when joint-guardians were appointed on September 14, 2012. Given her own age and the fact that [Blanket] is now 15 years old, Katherine feels that T.J. is able to assume all necessary responsibilities the guardianship,” the court document read.

4. Many People Have Thought Her Marriage to Joe Jackson Had Been Estranged

In recent years, rumors that Katherine’s marriage to Joe Jackson was estranged have been plentiful. In fact, the Daily Mail reported that the two had split back in 2010.

While the two have lived in separate states for several years now — Joe had been living in Las Vegas, while Katherine spent most of her time in Los Angeles — Katherine maintained that they still loved each other. She discussed the status of her marriage back in 2011, saying that she and Joe would travel to see each other fairly frequently.

“But after 61 years of marriage, they are still a couple in love, she said. Her husband spends most of his time at the Las Vegas home given to them by daughter Janet Jackson, but it’s not unusual for her to drive across the desert to spend a few days with her husband. Joe Jackson often travels to Los Angeles to stay with his wife. They sit together in court, sometimes holding hands,” CNN previously reported.

In 2014, the New York Post reported that Joe Jackson had been estranged from his whole family.

“No one has really taken the time to as much as ask about his well-being. Don’t get me wrong. Joe is OK. He gets around, travels a lot, but he’s no longer a part of the family,” a source told the outlet.

When it was first reported that Joe was on his “death bed” with terminal cancer, rumors that his family wasn’t spending time with him quickly surfaced. His son, Jermaine, took to Twitter to help clear things up.

“For however long he has left, my mother, siblings, and relatives want to be with him, without hindrance,” Jermaine tweeted on June 21.

5. She Penned the Autobiography ‘My Family, The Jacksons’

In 1990, Katherine Jackson released an autobiography titled, My Family, The Jacksons.

The book, which was co-written with Richard Wiseman, received 3.5 stars on Good Reads.

“One thing that stood out for me from this book was Mrs. Jackson’s relationship with her son Michael. She shared how he was a very determined and focused young man. She said that one that he kept his room immaculate for one year but after that he went back to messy. I loved her sharing that aspect of Michael. She shares little nuances about her family that will make you smile,” reads one 5-star rating from 2009. 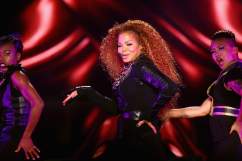 Janet Jackson Net Worth: 5 Fast Facts You Need to Know