Thomas Ravenel introduced his girlfriend to Southern Charm viewers and the show’s cast this season, opening up the biggest box of drama the show has ever seen. Ravenel’s girlfriend, Ashley Jacobs, has been accused of being a gold-digger, it’s been implied that she’s hit on some of his male friends, and she even verbally attacked the mother of Ravenel’s children, Kathryn Dennis. Fans of the show have been going crazy on social media, watching the chaos each week. And, it appears that the Southern Charm cast members are taking in the crazy as well. Each week, cast members including Patricia Altschul, Danni Baird, and Shep Rose, are open about their criticism of Jacobs.

But, it looks like Jacobs isn’t the only person on everyone’s bad side. Thomas Ravenel has now lost some of his longtime friends, who are also co-stars on the show. Patricia Altschul and Whitney Sudler-Smith have both confirmed that they no longer associate with Ravenel. It’s unclear whether Ravenel’s relationship with Jacobs, or his recent sexual assault allegations had anything to do with the rift. However, Reality Blurb has confirmed at least one reason for the break up in Altschul and Smith’s friendship with Ravenel. Ravenel’s ex-girlfriend, Luzanne Otte, reportedly gave an interview, which accused Ravenel and Jacobs of cyber-bullying her and “making her life hell” after she split with Ravenel lasts year.

So, what does this have to do with Altschul? Apparently, she is very close with Otte and even had first introduced her to Ravenel. She reportedly is upset at the way Ravenel and Jacobs have treated Otte.

After Altschul blocked Ravenel on social media, he publicly slammed her, according to Reality Blurb. Ravenel announced the news on Instagram, writing, “The queen of Southern gentility and the recent author on Southern etiquette has blocked me from Twitter and IG. Just FYI.”

Ravenel’s girlfriend, Jacobs, also took to social media to blast Altschul, writing, “The classy Grande Dame of Southern Charm is attacking me by retweeting nasty troll accounts. She doesn’t seem like the queen of gentility to me.” 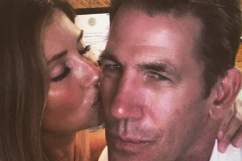