The 2018 Tony Awards air tonight at 8 p.m. ET/7 p.m. CT and the hosts this year are also performers. Sara Bareilles and Josh Groban are friends as well as colleagues, but this is there first hosting gig together. Bareilles, who is also a nominee this year, dished to People about her co-host, saying, “He is deeply kind, very intelligent and so incredibly funny. Sometimes he gets pigeon-holed as being a serious person because his art is serious, but he is an absolute riot!”

Another big performer tonight is Bruce Springsteen, who is one of this year’s recipients of the Special Tony Award. John Leguizamo is the other recipient. The Tony Award for Lifetime Achievement in the Theatre will also be given to Chita Rivera and Andrew Lloyd Webber. Additional awards include the Tony Honors for Excellence in Theatre going to photographer Sara Krulwich, costume beader Bessie Nelson, and Broadway dry cleaning service Ernest Winzer Clearners. The Isabelle Stevenson Award is going to Nick Scandalios, of the Nederlander Organization, and the Regional Theatre Tony Award is going to La MaMa E.T.C., which is an Experimental Theatre Club.

Award winner Springsteen, is taking home the Special Tony Award for his “Springsteen on Broadway” and recently, host Groban dished on The Late Show With Stephen Colbert, “The venue is abuzz with energy that Bruce is gonna be there. Today we were rehearsing and there were 30 people just hanging around the stage because Bruce was going to rehearse. People just want to be around the guy, and we’re very, very excited he’s going to be there.” According to the New York Post, Springsteen’s performance is set to kick off at 10:45 p.m. ET., right before Bernadette Peters presents the award for Best Musical.

For those who would like to check out Springsteen’s show on Broadway, NJ.com reports the set list to include the songs and acts, “Growin’ Up”, “My Hometown”, “My Father’s House”, “The Wish”, “Thunder Road”, “The Promised Land”, “Born in the U.S.A.”, “Tenth Avenue Freeze-Out”, “Tougher Than the Rest”, “Brilliant Disguise”, “The Rising”, “Long Walk Home”, “Dancing in the Dark”, “Land of Hope and Dreams” and “Born to Run”.

Some of the shows that are set to put on performances at the show include The Band’s Visit, Carousel, Dear Evan Hansen, Frozen, Mean Girls, My Fair Lady, Once on This Island, SpongeBob SquarePants, and Summer: The Donna Summer Musical. SpongeBob SquarePants and Mean Girls are leading this year’s nominations with 12 each. Angels in America, The Band’s Visit and Carousel are right behind them with 11 nominations each. 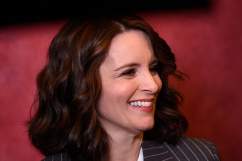 Tony Awards 2018 Live Stream: How to Watch the Tonys Online

Read More
Celebrities, Tony Awards, TV
Tonight is the 2018 Tony Awards. Get the rundown on the performers lined up, presenters and performances.