Episode 4 of The Bachelorette airs on June 18, 2018, at 8 p.m. ET/PT and 7 p.m. CT on the ABC network. But, if you don’t have cable or can’t get to a TV, you can watch The Bachelorette live online via your computer, phone or streaming device by signing up for one of the following cable-free, live-TV streaming services:

Hulu With Live TV: In addition to their extensive Netflix-like streaming library, Hulu now also offers a bundle of live TV channels, including ABC (live in most markets). You can sign up for “Hulu with Live TV” right here, and you can then watch a live stream of ABC on your computer via the Hulu website, or on your phone, tablet or streaming device via the Hulu app. 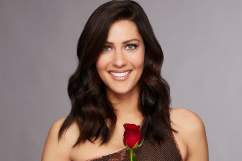 For tonight’s episode of The Bachelorette, Becca Kufrin and the remaining contestants head to Utah, where two lucky men get solo dates and the other men share a group date. Last week, pro football player Clay Harbor injured his wrist and needed immediate surgery. Unfortunately, this meant that he needed to eliminate himself from the competition, since his livelihood depends on his having a fully-functioning wrist. Since leaving the show, the Chicago Tribune has reported that he’s decided to re-focus on his NFL career. He needed to leave the show so that he would have enough time, after surgery, to heal before training camp.

When it comes to choosing to leave the show, Harbor said that, “To have to leave under those circumstances was very difficult — one of the most difficult decisions I’ve had to make in my life … I have no regrets going on the show at all. I know it ended tragically for me in breaking my arm, but I think Becca’s amazing and it’s worth the effort and everything to get to know her. The rehab’s going well, and I look forward to being on the football field this next coming season.”

Harbor also said that if he hadn’t gotten injured on the show, he may have won star Becca Kufrin’s heart, explaining, “I think that we had a connection, and the way that we were progressing, if we continued to progress at that rate, I definitely could have been one of the final guys there.”