Unfortunately, if you were planning to spend your Fourth of July evening curled up in front of the TV watching Yellowstone on Paramount, you’re in for an unhappy surprise. Yellowstone is not airing tonight on Paramount.

Because of the Fourth of July holiday, Paramount has decided to take a week off from airing Yellowstone. But you won’t have to wait too long until you see Kevin Costner and all that crazy drama again. Yellowstone will be back next week, Wednesday July 11.

This series is so complex and in-depth, with so much in-fighting and twists and turns, that you might want to spend tonight simply rewatching the previous episodes to get caught up again.

Episodes air every Wednesday (except July 4) at 10 p.m. Eastern/9 p.m. Central. (The premiere was an exception. Since that one was a two-hour episode, the premiere started an hour earlier than normal.)

If you don’t have cable or can’t get to a TV, you can watch the Paramount Network live on your computer, phone or streaming device by signing up for a cable-free, live-TV streaming service. Find out how to stream the show in Heavy’s story here.

The synopsis from Paramount reads: “Yellowstone is a drama series that follows the Dutton family, led by patriarch John Dutton. The Duttons control the largest contiguous ranch in the U.S. and must contend with constant attacks by land developers, clashes with an Indian reservation and conflict with America’s first national park.”

The series follows the violent world of the Dutton family, who own the largest ranch in the United States, as he strives to keep his land free from development and he finds himself in a war with other residents and businessmen. The series is written by Taylor Sheridan, who wrote Sicario and Hell or High Water. The series stars Kevin Costner, Wes Bentley, Luke Grimes, Kelley Reilly, Cole Hauser, Dave Annable, and Danny Huston. 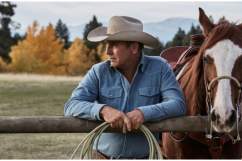 ‘Yellowstone’ Live Stream: How to Watch the Paramount Series Online