Tonight is the second live results show for America’s Got Talent 2018. Last night, 12 acts performed as part 2 of the quarter finals for the season and tonight, only 7 of them made it through to the next round. Read on for the live recap of what went down.

The Dunkin’ Save gets another go for season 13, with at-home viewers having the power to vote one of the acts in jeopardy through in the competition. Only one of the three acts can be saved live by America. Another of the three can be saved by the judges. Before getting into the results, the show gave a video recap of last night’s performances, along with some behind-the-scenes footage. Last nights acts included Makayla Phillips, Da Republik, Noah Guthrie, Quinn & Misha, funny performers Yumbo Dump, Glennis Grace, Duo Transcend, Voices of Hope, Front Pictures, Samuel J. Comroe, The Sacred Riana, and The Savitsky Cats.

Based on America’s votes, the acts who came in 6th, 7th and 8th place were Da Republik, Front Pictures, and Makayla Phillips. Only one of these three acts could be saved by America via the Dunkin’ Save, and one other could be saved by the judges.

Judge Howie Mandel said it was crazy for any of these acts to be in jeopardy. And, as the votes started coming in, Makayla Phillips and Front Pictures were very close in numbers.

After a commercial break, the results continued. Yumbo Dump, Noah Guthrie and Quinn & Misha were the first group up. And, the first act that made it through to the semi-finals was … Noah Guthrie. Upon hearing the news, Guthrie said he was grateful to America, as well as the judges. Host Tyra Banks said that Guthrie was shaking and holding back his emotions.

Next was The Savitsky Cats and the Voices of Hope children’s choir. Out of the two, Voices of Hope made it through and judge Simon Cowell gushed over how adorable he thinks they are. He also said he hopes to see them make it all the way to the finals.

For a break in programming, The Illusionists returned to AGT to put on a fun magic show, in collaboration with Light Balance, who put on a dance performance to Bruno Mars hit “Uptown Funk”. Up next were the results for Samuel J. Comroe and Glennis Grace. And the next act that made it through to the semi-finals was … both of them! Both Comroe and Grace made it into the next round and they appeared shocked at the results.

Finally, the Dunkin’ Save results. Which one of the three acts in jeopardy was saved by America? Host Tyra Banks said there was just 0.1% difference in the votes of the top two acts for the Dunkin’ Save, so it was extremely close. But, ultimately, Makayla Phillips prevailed. This meant that Da Republik and Front Pictures were up for the judges’ votes.

But, before the judges gave their judgments, they got a quick recap of the two acts’ performances from last night’s show. Judge Heidi Klum was the first to give her vote and she had difficulty picking between the two, but she said her gut told her to pick Da Republik. Mel B was the next judge to vote and she went with Da Republik as well. Mandel gushed over both acts and said he couldn’t decided … but he had to. Mandel ended up picking Front Pictures. And, it was up to Simon Cowell, who went with Da Republik, which meant that Da Republik made it through to the semi-finals.

Next week, the final 12 of the top 36 acts will perform for America’s votes. 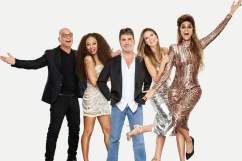 AGT 2018 Dunkin Save Vote: How to Use the Voting App for Week 2 of the Live Shows