Post Malone’s girlfriend, Ashlen Diaz, took to Instagram to “thank God,” after her boyfriend’s plane made a safe landing in New York. As previously reported by Heavy, the private jet that Post Malone was traveling on blew a tire shortly after taking off from Teterboro Airport in New Jersey. The plane burned fuel for several miles before making an emergency landing in New York.

“I landed guys. Thank you for your prayers. Can’t believe how many people wished death on me on this website. f**k you. But not today,” Malone tweeted a short while ago.

Diaz also took to social media to post a simple message on her Instagram story. “Thank You God,” the message read.

Diaz and Malone two have been dating since 2015. According to Capital Xtra, the two met a few years ago when Diaz “booked him for a show at a nightclub.” Despite a couple of ups and downs, the two have been navigating life together ever since.

1. She Is Super Shy & Suffers From Anxiety

Diaz and Malone keep their relationship extremely private. In fact, the two rarely share photos together on social media. Diaz suffers from anxiety and doesn’t put herself out there very frequently.

“The only photo I took the other night,” she captioned a selfie. “Only if you people knew how camera shy i truly am. being shy has stopped and limited me from so many opportunities and I’m so tired of it but i don’t know how I’ll actually get over it – i get asked why i never post and here it is I get anxiety and I’m shy. i love everybody and their comments and messages i receive you guys are truly the reason why I’m steps closer to actually getting over it. Love u (sic),” she added.

Diaz has been out on the road with Malone and is often at his shows. On Monday, August 21, she showed her support after her boyfriend won an MTV Video Music Award for his hit single, “Rockstar.”

3. She Was at Kylie Jenner’s 21st Birthday Party

Although Diaz is extremely private when it comes to being in the spotlight, she has gone to some pretty exclusively parties and has gotten the chance to hang out with some pretty famous people.

Most recently, Diaz attended Kylie Jenner’s 21st birthday party. She posted the picture above, taken at the soiree.

In 2016, during an interview with The Breakfast Club, Post Malone revealed that he and Diaz had broken up for a short period of time, but that they had gotten back together.

“It’s tough having a balance, between dedicating my life to music and dedicating time for Ashlen. It’s tough because you want to get into the studio, you want to do as good music as you can, sometimes you’re real busy,” he explained.

5. It’s Rumored That Malone Has Written at Least 2 Songs About Her

Like many recording artists, Malone has drawn on his love life for inspiration when it comes to some of his music. It’s rumored that at least two of his songs were inspired by his relationship with Diaz.

The first song, “Rich & Sad,” is thought to be about Diaz. You can read the lyrics, in part, below.

Ayy, I would throw it all away
I just keep on wishin’ that the money made you stay
You ain’t never cared about that bullsh*t anyway

His song, “Stay,” is about his struggle to maintain a romantic relationship. You can read the lyrics below.

Stay a little longer if you convince me
And tell me all the things that you have against me
Every time we make-up, the truth is fadin’
Everybody’s blind when the view’s amazin’
Damn, who are we right now? 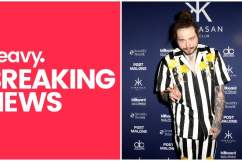