Netflix’s new series Insatiable has stirred up a mountain of controversy due to its perceived stereotypes about weight. The trailer alone led to a petition to keep the show from airing, which acquired over 220K signatures. Despite the controversy, however, many viewers are curious whether Insatiable will return for a second season now that its been released.

Based on early reviews and response from fans, it doesn’t look as though Insatiable will be returning for another round of episodes. The series currently holds a 15% score on Rotten Tomatoes, with a summary that reads: “Broad stereotypes, clumsy social commentary, and a failed attempt at “wokeness” make Insatiable hard to swallow.”

Of the countless shows that Netflix has cancelled over the past few years, none received as low a score, and many, including The Killing (70%), Sense8 (84%), and The Get Down (80%), were positively reviewed by critics. The only series that nears Insatiable in terms of negative reviews is Hemlock Grove, which still earned a 38% rating. Another factor working against it is that Insatiable is an original property, and therefore doesn’t belong to a literary series that could otherwise inspire interest in additional stories.

That said, the series has been given an unexpected amount of attention due to the controversy, and neither the cast nor series creator Lauren Gussis have booked projects that would conflict with a potential second season. There is also the fact that Insatiable was initially planned to air on The CW, a network that rarely ever invests in limited series. With this is mind, its likely that Gussis had plans to move forward with the characters. Netflix has not yet commented on the future of the series.

UK resident Florence Given, who started the petition to cancel Insatiable, feels that series promotes a toxic narrative about girl’s bodies. “The toxicity of this series, is bigger than just this one particular series,” she wrote. “This is not an isolated case, but part of a much larger problem that I can promise you every single woman has faced in her life, sitting somewhere on the scale of valuing their worth on their bodies, to be desirable objects for the male gaze.”

Debby Ryan, Alyssa Milano, Lauren Gussis & Dallas Roberts Chat Netflix's "Insatiable"Created by Lauren Gussis, "Insatiable" is a dark, twisted revenge comedy starring Debby Ryan, Dallas Roberts and Alyssa Milano. For years, Patty (Debby Ryan) has been bullied, ignored, and underestimated by those around her because of her weight. But now that she finds herself suddenly thin, Patty is out for payback against anyone who has…2018-08-07T22:14:14.000Z

“That is exactly what [Insatiable] does,” she adds. “It perpetuates not only the toxicity of diet culture, but the objectification of women’s bodies. This series needs to be cancelled. The damage control of releasing this series will be far worse, insidious and sinister for teenage girls, than it will be damaging for Netflix in their loss of profit.”

Gussis, who worked on Showtime’s Dexter, told The Hollywood Reporter that the story is meant as a “cautionary tale” and not a critique. “I wanted to poke at all those issues through comedy,” she explained. “But every single one of the issues that these characters struggle with — from eating disorders to body dysmorphia, to sexuality to needing outside power and validation, to wanting to be perfect, to mental illness — I have struggled with every single one of those things.”

“People are mad, and they’re talking about it,” she continued. “I appreciate the room for the conversation. That’s my intention with art, is to spark conversation through satire and comedy. Because then at least people are talking about it and not brushing it under the rug, and airing it out. They have the opportunity to eventually find out how somebody else feels about an issue. Then ultimately, they feel more connected to each other.”

Insatiable season 1 is currently available to stream on Netflix. 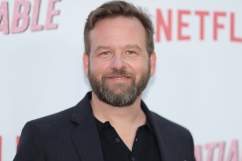