Nicki Minaj continued her verbal assault on the music industry during Thursday’s episode of Queen Radio. The rapper continued to berate guest host Ebro as well as Travis Scott, whom she feels inflated his album sales to surpass her Queen release.

After awarding Scott the “C*cksucker of the Week Award” on last week’s episode, Minaj bestowed the honor upon Irving Azoff, Scott’s manager and the former CEO of Ticketmaster Entertainment. She accused Azoff of leading a smear campaign against her NickiHndrxx Tour, which was recently postponed. “There’s never been a queen in the history of this world who hasn’t ruffled feathers,” she said. “There’s never been a black queen who hasn’t been told she’s not angry or bitter.”

Check out the episode below.

“There are so many powerful people in this industry who have tried to keep me from speaking up,” she said. “May god be with you Irving.” Conversely, Minaj said that she has no problem with Scott’s girlfriend Kylie Jenner, whom she previously accused of helping boost Scott’s album sales.

“She gotta ride with her man, why the f*ck wouldn’t she?” she reasoned. “We’re not gonna make this what it’s not. She’s a dope girl .. This is strictly about music, she has nothing to do with this. My fans are not feeding into this. We love Kylie.” The rapper also selected the music publication Pitchfork as the winner of her “D*ck Rider of the Year” award. In the past Pitchfork has given Minaj’s The Pinkprint a 7.5 rating out of 10, and Queen a 7.6 rating out of 10.

How to find us. Press play. Picking 10 lucky winners today. Use the hashtag #QueenRadio on Twitter & IG. LETS GO BABY!!!!!!! Live link also in my bio

The rapper continued to air her grievances when she invited guest host Ebro onto the show. Her and Ebro have had a checkered past together, with rumors that the two had a physical relationship in the past. Rumors that are at least partially true, according to Minaj’s remarks. During their discussion, the rapper responded to one of Ebro’s comments by saying: “Don’t hate me cuse it take you seven minutes.” She followed that up with “If you don’t make me c*m, imma hurt ya feelings.”

These comments caused a stir on Twitter, with many fans stating their shock at Minaj’s brutality. Check out some of the most notable reactions below.

"DON'T HATE ME CAUSE IT TAKE YOU 7 MINUTES" I JUST SPIT OUT MY WATER #QueenRadio pic.twitter.com/7DdmdtK1ju

Nicki Minaj's relationships convo with Ebro is hilarious. Now, this is what we like to hear. Pure entertainment & comedy. ? #QueenRadio pic.twitter.com/GMVY3Utnab

Other fans were in support of the rapper’s antics, with one user writing: “This episode of #QueenRadio was everything to me we laughed together cried together and so much more. She deserves love and happiness and she doesn’t deserve the constant hate she receives it’s just not right I will continue to be by her side.” 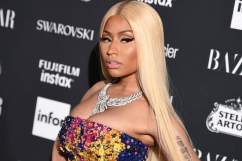