Another day means more drama for Meghan Markle, as her step-sister, Samantha, has slammed her on social media once again. As the Duchess of Sussex spent her 37th birthday at a wedding with her husband, Prince Harry, Samantha decided to take to Twitter to slam “Meg” for not reaching out to their father, Thomas Markle, on his birthday.

Samantha Markle took a moment out of her day to wish her sister a happy birthday, but the message came with a twist of the knife.

“Happy birthday, Meg! It would be so lovely and appropriate for you to send DAD a BELATED birthday card for his July 18,” Samantha tweeted, sending an @ reply to Kensington Palace, according to the Daily Mail.

Meghan Markle has had a difficult relationship with her family, especially her father Thomas, for months. He was supposed to walk her down the aisle at her wedding back in May, but some health issues kept him from traveling across the pond. Since then, Thomas Markle has given a few less-than-nice interviews, and has spoken out about his relationship (or lack thereof) with his daughter.

Samantha Markle has also thrown some serious shade Meghan’s way — but this isn’t anything new. Last year, The Sun reported that Samantha Markle tweeted something “unprovoked” after the former Suits actress wrote the article, “How Periods Affect Potential” for Time Magazine.

The tweet was posted in response to tennis pro (and dear Meghan Markle pal) Serena Williams, who tweeted her support for Meghan, praising the article as “inspiring.”

“But what did she donate to them to make real change come about? Money for toilets, maxi pads, or just a photo op?” Samantha Markle tweeted in reply. Another Twitter user mentioned Meghan’s job as an actress, to which Samantha Markle responded, “You mean the ‘job’ on 90210?”

Things certainly haven’t gotten any better for Meghan Markle, who reportedly doesn’t have a relationship with her father or her step-sister at this time. As previously reported by Heavy, Meghan Markle and Prince Harry might be taking some time away from the spotlight for a bit, as the media continues to have a field day with all of this ongoing family drama. You can read more about that by clicking the link below: 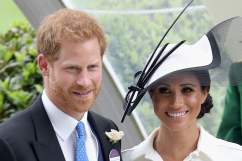