Ever since Prince Harry and Meghan Markle got engaged, royal watchers have been nearly obsessed with the couple. The royal obsession seemed to shift, albeit slightly, from Kate Middleton to Meghan Markle, who was set to be the next member of the monarchy.

As the royal wedding approached, many people couldn’t help but wonder what Markle would wear, how she would style her hair, and who her bridesmaids would be. And then, things took a turn as her family drama became the focus of attention.

Markle’s father, Thomas Markle, was set to head to England and walk his daughter down the aisle. However, in the days leading up to the wedding, Thomas Markle fell ill, some outlets reporting that he had a heart attack and couldn’t fly across the pond. From there, the obsession with Meghan Markle and Prince Harry became more dramatic — and not in a good way.

Thomas Markle didn’t make it to St. George’s Chapel on May 19. In fact, the only member of Markle’s family that attended the wedding was her mother, Doria Ragland. That, of course, caused even more negative speculation and chatter.

Flash forward two months, and Meghan Markle’s father has been giving interviews, talking poorly about his daughter and her new life. Earlier this week, sources close to the couple told the Daily Mail that the Duchess of Sussex was not willing to reconcile with her dad.

“A reconciliation is completely off the table at the moment. There’s no chance right now – he’s been a complete embarrassment. They’ve had problems for some time – from before she met Prince Harry. She’s amazed by what’s happened but is taking what he says with a grain of salt. The Royal Family isn’t as upset as you’d think either. Nothing any of them [the Markle family] say has any real consequence and they [Meghan and Harry] have more important things to focus on,” a source told the outlet.

Now, there are reports that Prince Harry and Meghan Markle will be “retreating” from the spotlight. A source told Vanity Fair that the couple has been keeping to themselves, living a very private life at their home in Cotswolds.

“It is very clear they want to be private and left alone. The property is in the middle of woodland and you wouldn’t know it was there. It is very remote which is why they like it. It’s like a fortress. There’s a huge security presence, you can’t get close,” said a Cotswolds local.

Although Harry and Meghan have a pretty full schedule with their upcoming trip to Australia, Fiji, the Kingdom of Tonga, and New Zealand, the two very well may choose to live their lives at quietly as possible as to help settle the turmoil that is greatly stirred up by the mainstream media. 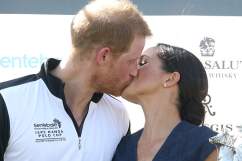 Meghan Markle & Prince Harry Might Have Children Sooner Than You Think