The 2018 Teen Choice Awards are here and there is a small lineup of performers set to take the stage live. Nick Cannon and internet personality Lele Pons are co-hosting the event, which is celebrating its 20th anniversary. Some of the presenters this year include Zac Efron, Chris Pratt, Bryce Howard, Lucy Hale and Noah Cyrus, according to The Independent, but let’s get into tonight’s big performances. Lauv, Meghan Trainor, Khalid, Evvie McKinney, Foster the People and Bebe Rexha are the acts set to perform. Get the rundown on some of them below.

from @fallontonight, you can watch on youtube. todays my birthday and a lot has happened in the past year, but above all im thankful for you guys & this growing family. you guys give me positivity on days i cant seem to find any, your responses to my late night existential stories, all of it. i fucking love you to death and am blown away by your hearts & minds and i mean it. ?

For Lauv’s performance tonight, he will sing “I Like Me Better”. Ari Staprans Leff, who is known best by his stage name, is a songwriter, also known for his song “The Other”. Recently, Luv performed “I Like Me Better” on The Tonight Show With Jimmy Fallon and Rolling Stone gave the backstory on how Lauv created the song. According to Rolling Stone, the song was inspired by a relationship Lauv had when he moved to New York for school.

When Lauv dished on his approach to writing his songs based on his experiences, he told Rolling Stone, “I sort of feel that I have to constantly be really, really honest with the way I feel, and I have to get that out. All the best art and music feels like some type of truth – even if it’s really simple – that you just can’t deny. A listener can feel that.”

Meghan Trainor is set to perform her single “Let You Be Right” on the TCAs stage, but this isn’t the only single she’s dropped lately. In recent weeks, Trainor also released her song “Treat Myself”. It’s the title track off of her upcoming album, as reported by Billboard. The album is due to be released August 31, 2018, with songs “Can’t Dance,” “No Excuses” and “All The Ways” included on the record. Some of the individual tracks from the upcoming album are already released for purchase on Amazon. In addition, the album is also available for pre-order.

Trainor recently wrapped up the latest season of The Four as a judge, alongside Diddy and DJ Khaled. Recently, Khaled was in the media for Chris Brown’s duet “Fairytale” with Skye that he produced. In addition, his song “No Brainer”, featuring Justin Bieber, Quavo and Chance the Rapper, was also recently released, according to Billboard. Previously, the four artists collaborated in 2017 on the song “I’m the One”. Nicki Minaj also just dropped her album “Queen” and, on it, she name drops several industry big wigs, including DJ Khaled, 50 Cent and Drake. On the album, Minaj’s lyrics make it seem that she doesn’t have the best relationship with Khaled. She raps, “Had to cancel DJ Khaled, boy, we ain’t speaking/Ain’t no fat n—a teling me what he ain’t eating.” According to E! News, the “eating” line referred to an interview in which Khaled admitted he does not perform oral sex.

Thank y’all so much to evvieone who tuned into @thefouronfox last night to see me perform my BRAND NEW SINGLE, “How Do You Feel” which is NOW available on ALL PLATFORMS. Click the link in my bio to download YOUR copy RIGHT NOW? A special thanks to @goldiies_world for being my big sister, writer, and producer on this amazing song♥️ Special thanks to @jaycenjoshua for making my first record come alive through the speakers with that INCREDIBLE MIX and MASTER?? Thank you so much @diddy for always fighting, helping, and mentoring me. It means the world to me to have you believe in me♥️ And last but CERTAINLY not least, Laurieann Gibson, @boomkack thank you for believing in me, thank you for pushing me, and thank you for breathing life, boldness, and beauty into this performance. You truly are an #ANGEL ?? I’m ONE of the MOST blessed girls in the WORLD! And that’s a #fact. #HowDoYouFeel

The Four season 1 winner, Evvie McKinney, is performing “How Do You Feel”. This is McKinney’s debut single and she performed it during The Four‘s second season finale. The ballad was produced by The Four judge and co-creator Sean “Diddy” Combs, according to Billboard. The winner for The Four season 2 was the only male contestant left in the mix – James Graham. In addition to Graham, the other three finalists in the finale episode were singers Sharaya J, Whitney Reign and Leah Jenea.

According to Just Jared, Bebe Rexha is singing her song “I’m a Mess” for the event. Rexha, who has moved from behind-the-scenes songwriting to the spotlight, has said she’s always felt like the “underdog,” coming out with hits like Eminem and Rihanna’s “Monster”. As for how Rexha decided to break out on her own, she revealed to Rolling Stone that it had to do with respect.

Rexha explained, “I was in tons of rooms with tons of men and some of them were really sleazy and shitty, but for me it was all about the art. If I felt I were being taken advantage of or disrespected, I’d leave. I’d be like, ‘Fuck this person. I’m gone.'” 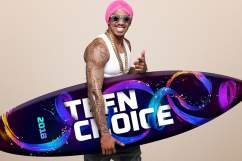