Mac Miller’s death has hit the rap community hard. The late musician has received tributes from the likes of Snoop Dogg, Chance The Rapper, and Drake, and from fans who praised albums like Watching Movies With the Sound Off and The Divine Feminine.

Miller’s death has also sparked curiosity over whether he was working on any music at the time of his death, and whether he will have any posthumous releases. Considering his most recent album, Swimming, was released on August 4, and he was still in the midst of rolling out music videos for the singles, it doesn’t seem likely that he was already working on another solo release.

Did Miller Record a Joint Album With Post Malone?

hold on to a tree

Miller did tease the possibility of a joint album with rapper Post Malone. In a recent interview with Rolling Stone, Miller said that he and Malone had discussed recording alongside producers Frank Dukes and Thundercat.

“Me and Post have been talking about doing an album, so we got together,” he said. “And then Frank Dukes has worked on a bunch of my records, but we had never met, so he came through too. And then Thundercat appeared and we all started jamming… It was beautiful. We were just having a great time.”

I had a conversation with Craig Jenkins for New York Mag about Swimming amongst other things. Link in bio. Photos by @christaanfelber

Miller also told Rolling Stone that he was eager to work with Malone, whom he had yet to officially collaborate with, and joked that he “makes music like a meth addict,” fueling rumors that they were already working on the album. On Friday, Malone spoke with TMZ about the influence that Miller had on his career and the status of their collaborative release.

“He was such a beautiful f*cking dude and such a sweet dude and loved everybody,” he said. “I grew up listening to his music and he really inspired me. This f*cking sucks, man. He was too sweet, super nice. We played beer pong at the studio and he kicked a*s.”

As for the joint album, Malone made it clear that he and Miller had simply discussed recording together, and didn’t have the chance to actually record tracks. “We were supposed to do an album,” he explained. “But I love him to death and we’re all thinking about you and we miss you buddy, very, very much.” Watch Malone’s full interview above.

Will There Be Any Posthumous Mac Miller Releases?

Miller was known for being a prolific recording artist, with five studio albums and a dozen mixtapes to his name. In an interview with VIBE, producer Pharrell Williams, who worked with Miller on the tracks “Onaroll” and “Glow,” called him “a case study” in terms of work ethic.

In 2015, Miller tweeted out that he had created “nine albums worth of material” before arriving at the final tracklist for his album GO:OD AM. This raises the possibility of there being posthumous Miller releases in the future, though there have yet to be any such announcements. 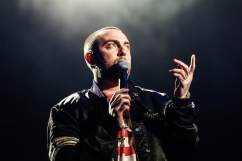 Mac Miller Net Worth: 5 Fast Facts You Need to Know