U sher is prepping to drop his new surprise album A. The album is set for release at 9 p.m. Pacific on Thursday (Oct. 11) or midnight Eastern on Friday (Oct. 12), according to his Instagram. If that is too late for you to stay awake, you can stream and listen to it at your convenience.

Generally, albums become available around midnight Eastern on streaming platforms like Apple Music and Spotify. This was the case for Usher’s previous releases, 2012’s Looking 4 Myself and 2016’s Hard II Love. On occasion, however, these platforms will throw a curveball at listeners.

The Album Will Drop Midnight Eastern Time on Streaming Services

Usher has been relatively quiet on the music front since he dropped Hard II Love. The R&B legend broke his silence on Thursday morning, formally announcing that his new album would be a love letter to his hometown of Atlanta. According to Billboard, Usher teamed up with acclaimed producer Zaytoven, who’s credited on each of the album’s eight tracks. Usher and Zaytoven previously worked together on the 2009 single “Papers,” which peaked at number 31 on the Billboard Hot 100.

The Album Will Be a Tribute to His Atlanta Hometown

Usher shared a video trailer to go with the announcement, which shows him riding around Atlanta with Zaytoven and making stops at Waffle House and the Cascade Family Skating rink. He also shared the album’s official tracklist, which you can check out above.

There are no listed features, but its possible that he wanted the features to be kept secret until release time. Usher was spotted in the studio with Jay-Z earlier this week, fueling rumors that they may release a follow-up to their 2010 hit “Hot Tottie.”

Usher hasn’t appeared on a new track since 2016, and A will mark his first album since he was sued by a woman named Laura Helm for allegedly giving her an STD. According to TMZ, Helm and Usher hooked up in Atlanta in April 2017, and she claims that she was exposed to Herpes Simplex 2 after they had unprotected sex. Helm sued the singer for $10 million, and eventually raised it to $20 million after stating that she tested positive for the STD herself. The lawsuit was eventually thrown out on November 17.

Helm’s lawyer withdrew from the case and Helm got a new attorney, who filed legal docs to dismiss the case. TMZ adds that it was dismissed without prejudice and “with intent to refile,” though it is unclear why her lawyer made the move to dismiss. 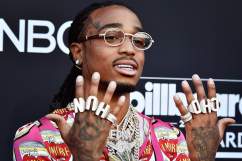 What Time Will Quavo’s Album ‘Quavo Huncho’ Be Released?