Detective Pikachu‘s first trailer has finally released. You can see it for yourself above.

Detective Pikachu is the first live-action Pokemon movie and follows the storyline of the Nintendo 3DS game of the same name. The film stars Justice Smith as Tim Goodman, who has to find his ace private eye father after he goes missing. His companion is Detective Pikachu, a wise-cracking sleuth voiced by Ryan Reynolds of Deadpool fame. Tim and Pikachu can understand each other but no one else can understand Pikachu. The pair comb Ryme City for clues as they uncover a plot that could shatter the co-existence of Pokemon and people in the city.

The Warner Bros. presented film is directed by Rob Letterman, who also led Goosebumps and Monsters Vs. Aliens. Also on board are two-time Oscar nominated Director of Photography John Mathieson (The Phantom of the Opera, Gladiator), Production Designer Nigel Phelps (Pirates of the Caribbean: Dead Men Tell No Tales) and Oscar-winning Editor Mark Sanger (Gravity).

The most notable thing about the trailer is the scientifically accurate Pokemon designs created by Moving Picture Company (Wonder Woman) and Framestone (Guardians of the Galaxy Vol. 2). Fan-favorite Pokemon like Charizard and Greninja have been given realistic animal textures and features while still retaining the body structure and overall essence of their appearances in the main Pokemon games.

In other news, the first set images for the upcoming Monster Hunter movie have been released online. 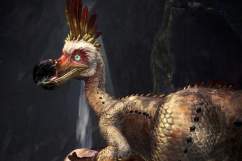