The season 1 finale of Dancing With the Stars Juniors airs tonight at 8 p.m. ET/PT and 7 p.m. CT, on the ABC network, and there are four teams of contestants left in the mix. Before we get into the remaining cast members, what to expect on tonight’s show, the finale performances and winner predictions, this is your SPOILERS WARNING. Do NOT continue reading if you don’t want to know any info on the finale or the winners.

Now let’s get into the synopsis on the finale episode, provided by ABC. Tonight’s plot description reads, “In a stunning surprise at the end of last week’s episode, there was no elimination at the end of the night, so the four semi-finalist kid couples have all advanced to the finals.” The finale episode is also holiday-themed and the four remaining celebrity couples, along with their mentors, will perform.

For the finale’s opening number, all 12 junior celebrity contestants and their partners will participate, in addition to their mentors, the show’s judges and the hosts. They will dance to Whitney Myer’s “Dancing in the Stars.” Each of the four remaining finalists will perform two routines for the judges. The first will be a reprise of a favorite dance from the season, which will include their mentors. Their other performances will be holiday-themed freestyle dances. At the end of the show, one couple, along with their mentor, will be crowned the first ever champions of DWTS Juniors. The outcome is based on the studio audience vote, which is combined with the scores of the judges.

The show has been pre-taped this season, along with the finale, so the winners have already been chosen. When it comes to the winner rumors, Mackenzie Ziegler’s team with partner Sage Rosen and pro Gleb Savchenko has been dubbed the front-runner. Ziegler was already a dancer before she came on the show, which caused complaints from some viewers on social media, who felt she had an advantage. Whatever the case, it will be surprising if Ziegler doesn’t take home that mirrorball trophy. It’s safe to say she is the contestant who won this season.

When it comes to tonight’s performances, here is the rundown on the lineup:

Miles Brown and Rylee Arnold perform a Salsa routine with mentor Lindsay Arnold to “Who Let the Dogs Out” by Baha Men.

Sky Brown and JT Church are performing a dance to “Underneath the Tree” by Kelly Clarkson. 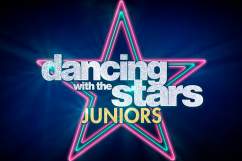 How to Watch ‘Dancing With the Stars Juniors’ Finale Online

Read More
Dancing With The Stars, DWTS, Reality TV, TV
Season 1 of Dancing With the Stars Juniors airs its finale tonight. Read on for predictions on the DWTS Jr. winner and spoilers on the finale episode.