Lala Kent’s relationship with Randall Emmett has been scrutinized for several seasons on Vanderpump Rules, though he hasn’t appeared on the show. Emmett was reported to be legally married, though separated when the two started to date and now he is divorced. Emmett and Kent have since gotten engaged and have been more public about their relationship. They even appeared on an episode of Flipping Out, designing the inside of their home together.

Emmett proposed to Kent in September 2018, a few months after the sudden death of her father. Fortunately, just before Kent’s dad died, Emmett reportedly asked him for permission to marry his daughter. Kent revealed on “The Jenny McCarthy Show” that, “My mom told me that Rand had asked my dad for my hand before he passed away over the phone. So that just like — that makes me so happy because I — I’m struggling with the fact that — like I won’t have a dad to see me, you know, have babies or get married, so that means a lot to me that Rand did that before he passed.” Page Six reported that Emmett was previously married to Ray Donovan star Ambyr Childers and their divorce was finalized in December 2017. He has one child, a daughter named London Thea Emmett. Emmett reportedly first filed for separation from Childers in April 2015, but asked the court to dismiss their case in May 2016. Page Six reported that this was “around the same time our insider says Kent met Emmett.”

Emmett popped the question to Kent at her birthday celebration in Cabo San Lucas, Mexico. When it comes to the engagement ring, it was designed by Richie Rich from Leon Diamond in New York. Fellow Vanderpump Rules star Scheana Shay commented on the ring to Us Weekly, saying, “I saw her ring. It’s like the size of my hand. It’s better than a Kardashian ring. It is literally like ring goals.” Shay also dished on Kent’s man, saying, “He’s one of our favorite people to hang out with. He’s so much fun, such a great personality, absolutely obsessed with her. They are a very good match.”

Though Emmett appeared with Kent on Flipping Out on Bravo, it’s unlikely he will appear on this season of Vanderpump Rules. Interestingly enough, the couple actually met when Kent was filming her first season of VPR. In an interview with Cosmopolitan Kent said they met at SUR Restaurant, where much of the show takes place. Kent recalled, “He came in for a Christmas dinner and sent his assistant up to me and asked me if he could get my manager’s contact info because he wanted me in a film. And so then we started that whole process, I booked the film and then we just had this instant connection. It was my first season of [Vanderpump Rules]. I think only like, three episodes had aired of Season 4 … And we’ve been together almost three years now.”

Emmett works in the film business. Kent says she loves him because he’s her best friend and he reminds her of her late father. 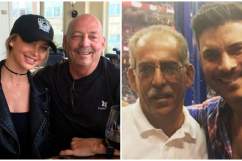