“So everybody been bugging me and everything,” she said in the video. “And you know, I been trying to work things out with my baby father for a hot minute now. We’re really good friends and you know we’re really good business partners… He’s always somebody that I run to, to talk to and we got a lot of love for each other but things just haven’t been working out between us for a long time.” Watch the full video below.

Cardi B Announced That She & Offset Are Planning on Getting Divorced

“It’s nobodies fault it’s just like I guess we grew out of love,” Cardi added. “But, we’re not together any more. It might take time to get a divorce. I’m always going to have a lot of love for him because he is my daughter’s father.”

Cardi and Offset have been together since mid-2017, and they announced their engagement on October 27. The details surrounding their marriage were kept under wraps until June 25, when Billboard uncovered a marriage license stating that they had secretly been wed in their bedroom in September. Shortly afterward, on July 10, the couple gave birth to a daughter, Kulture Kiari Cephus. It was Cardi’s first child and Offset’s fourth with as many women.

During their marriage, Cardi and Offset collaborated on several tracks together, including “MotorSport”, “Lick”, and “Who Want the Smoke?” alongside Lil Yachty. In an interview with The Fader, Cardi talked about how they encourage one another as artists.

“It’s been a blessing, me meeting him and meeting his friends. I see how hard they work,” she explained. “And that motivated me to work even harder. And I see how good things are going for them and how popping it is to be number one. And I’m like, I want that. A lot of people just see they jewelry and they money, but I don’t think a lot of people see how hard they work for that shit every single day.”

The couple were plagued by rumors of Offset’s infidelity during their time together. Cardi addressed these rumors during an interview with Cosmopolitan.

“It’s like everybody is coming down my neck like, ‘Why are you not leaving him? You have low self-esteem,’” she revealed. “I know I look good. I know I’m rich, I know I’m talented. I know I could get any man I want — any basketball player, football player. But I want to work out my sh*t with my man, and I don’t got to explain why. I’m not your property.” 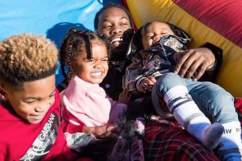 Read More
Cardi B, Instagram
The rapper took to Instagram Live to announce a separation from her husband.