Bob Einstein has died. The comedian best known for creating “Super Dave Osborne” and starring in Curb Your Enthusiasm passed away Wednesday morning in Indian Wells, CA. According to Deadline, his cause of death was complications stemming from his recent cancer diagnosis. He was 76.

Einstein had been a comedic force since 1968, when he came to Hollywood to write for The Smothers Brothers Comedy Hour. He appeared on the show as a character named Officer Judy and later received an Emmy Award for his writing contributions.

Einstein, 76, Died Shortly After Being Diagnosed With Cancer

Einstein went on to find greater success when he created the character of Super Dave Osborne character on a 1972 episode of The John Byner Comedy Hour. Osborne, a parody of daredevil stuntmen from the period, would go to be a hit with viewers, and Einstein reprised the character on the 1979-85 television series Bizarre and a handful of times on Late Night with David Letterman.

In 1987, Einstein landed a series of his own titled Super Dave. The series ran from 1987 to 1991, and was followed by the 1992 animated series Super Dave: Daredevil for Hire. Einstein would continue to reprise the character throughout his career, be it the 2000 film The Extreme Adventures of Super Dave or the Spike TV sketch series Super Dave’s Spike Tacular.

Einstein’s other notable roles include Marty Funkhouser on Curb Your Enthusiasm and Larry Middleman on the third season of Arrested Development. When asked how the former came to be, Einstein told The Futon Critic that he and series creator Larry David worked on the character together.

“Yeah, I created him once Larry said he wanted me to do it and I just love it,” he said. “Did you see the episode with the golf? It’s probably the funniest one ever done and it’s hysterical. In the ninth episode, he and I have a real problem as I come to the Seinfeld rehearsal uninvited and he goes ape-sh*t. I love doing Funkhouser.”

Einstein also said that improv element of creating was his favorite, whether it be with Super Dave or other TV shows that he appeared on. “It’s really the best way to work for me and the people I’ve worked with on Super Dave and on Larry’s show; it just really works. What you do is you try to make each other laugh. It allows me to really think funny on my feet – if you think I’m funny – and you really have to listen to what the other person is saying.”

Einstein’s last screen appearance was on Jerry Seinfeld’s Comedians In Cars Getting Coffee. He was the first guest to appear twice on the Netflix series twice. Einstein is survived by his wife of 40 years, Roberta Einstein; his daughter Erin Einstein Dale; his son-in-law Andrew Dale; and his grandchildren Ethan and Zoe. He is also survived by his brothers Cliff Einstein and Albert Brooks. 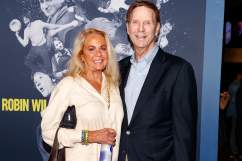