Jenny McCarthy, Robin Thicke, Ken Jeong, and Nicole Scherzinger are the judges on the new Fox TV show The Masked Singer, with Nick Cannon as the host. Celebrities dress up in elaborate costumes and sing on stage, as the audience and judges try to figure out their identities. Tonight, on January 2, 2019, the premiere airs and the first batch of celebrities will be revealed. For those who do NOT want to know the spoilers on The Masked Singer premiere, STOP READING NOW. Otherwise, read on below.

Ahead of the premiere, when talking about what went into casting big time athletes, performers and other stars, show producer Craig Plestis told The Hollywood Reporter that, “When the masks come off, everyone has to recognize that face — or they have to have some huge credibility, either in sports, in entertainment, TV, film, music. Some people were easy to cast. They saw the potential of the show. They loved the idea of being behind a mask and no one knowing who they were, and showing off the talent that no one knew that they even had. They got it right away. Some people said no. In the end, we got great names, and all of them are big in their field in one way or another.”

He continued, “The stats that we have, between the Grammy winners [and other achievements], is really phenomenal. When we started putting together and looked at all the awards all these people have won, we realized we just don’t have one or two great people; we have 12 great people.”

The Masked Singer previously was a show airing in Korea and Ryan Reynolds appeared on the show, disguised in a unicorn costume. On stage, he performed the song “Tomorrow” and when he revealed his face, the audience was shocked, to say the least.

Now that you have the rundown on the kind of faces you could be seeing this season on The Masked Singer, let’s get into the live recap on tonight’s episode. We will be updating this post live as the episode airs. 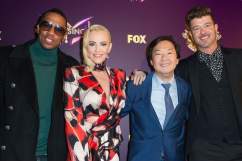 The show kicked off by explaining the run of show. Each week, the celebrities will perform for the judges. At the end of each episode, the least popular performer will be unmasked. Six performers take the stage tonight. Who’s behind the masks?

For the first face-off the peacock-dressed performer took the stage. Up against the peacock is a hippo with swagger. But, the peacock was the first performer to reveal clues about themself. Peacock said they first appeared on stage when they were 5 years old and they said it’s probably been a while since your mother had a poster of them on her wall. The peacock also said that Michael Jackson was a good friend of theirs. Peacock then went on to perform a song from The Greatest Showman. After seeing the peacock with a deck of cards, we thought of Las Vegas, so our guess is either Wayne Newton or Donny Osmond, but we still don’t know who it could be. We’ll have to wait and see when the peacock gets revealed!

Judge Robin Thicke said that the peacock is definitely a seasoned performer. The peacock then talked about being a part of a magic act at one point but never being attacked by a tiger, which sounds like a Vegas act, right? 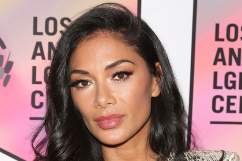 Who Is Nicole Scherzinger Dating? Get to Know Her Boyfriend Grigor Dimitrov

As for the hippo, he says that he has a voice but that no one has heard it yet. The judges think he could be an athlete. For his performance, the hippo took on “The Prerogative” and it was clear that he wasn’t a professional singer. Judge Nicole Scherzinger guessed that the hippo could be a basketball player, but the hippo said his favorite pastime is bowling. This one’s tough.

Soon, the judges and audience members voted which of the two performers they preferred. And, the first winner was the peacock, which means that fans will have to wait to see the peacock’s true identity. At the end of the show, the hippo could have to show his face.

Up next was the monster, facing off against the unicorn, who was donning an all-white dress. The monster said the world has dubbed him a monster and she talked about taking a break from the public eye. The monster then said that no one can stop him from doing what he loves and he’s here to set the record straight. He also talked about coming out with a mixtape. This performer had a surprisingly wonderful voice and sang “Don’t Stop Me Now” by Queen. Our guess is that the monster could be a singer from the 1980s, someone like Bobby Brown, who has been dubbed a “bad boy” in the past.

Robin Thicke said that he could tell the singer was a more mature performer and Nicole Scherzinger said she heard some soul in the voice.

The unicorn was up next and she said that she grew up in one of the richest neighborhoods in Beverly Hills. She once dreamt of singing but was told she was tone deaf. She said she was put down over the years and no longer wishes to break free. She says that true magic comes from within. The unicorn took the stage to perform Rachel Platten’s song “The Fight Song”. Jenny McCarthy made guesses about the unicorn that were along the lines of Paris Hilton. Then, the unicorn said that people call her “Bird”. Could it be Saoirse Ronan, who starred in the award-winning movie Lady Bird? We’re stumped. The unicorn was voted through by the audience and judges.

Oh Deer, some clues! ? Make sure you send us your guesses and include #TheMaskedSinger + #DeerMask. pic.twitter.com/ASPdhZPqs4

Up next was the deer, who said that sometimes people have difficulty getting past his persona. He also talked about getting knocked down before. Taking the stage, the deer was very tall and was clearly not a seasoned performer. For his performance, the deer sang the song “Thunder”. The judges guessed some professional fighters as the identity of the deer. Judge Robin Thicke asked the deer if he plays for the NFL or has ever played for the NFL. The deer pled the fifth and would not answer, which sounds like a definite “yes”.

This meant that either the deer, the monster or the hippo would be unmasked tonight. And, based on the votes, the deer and monster made it through to next week, while the hippo was sent home. So, who was the hippo? Two of the judges guessed Deion Sanders, but the identity was … Antonio Brown from the Pittsburgh Steelers and formerly a contestant on Dancing With the Stars.

Lol the first person unmasked on #TheMaskedSinger being Antonio Brown is all kinds of hilarious. Sorry for the spoilers. pic.twitter.com/ytIYTG4U67