Helena Christensen, 50, a former Victoria’s Secret supermodel from Denmark, has been seen spending time with her new friend David Beckham and his wife Victoria is reportedly not thrilled about it.

British tabloid newspaper the Sun reported that friends of “Posh Spice” have said that she feels uneasy when her husband spends time with female celebrity friends. The Beckhams have been married for nearly two decades and have four children.

Christensen and Beckham met in Miami in December of 2018. She posted a picture of the two of them together at a party with the caption, “Ballin.” They were reportedly introduced by a mutual friend, Dave Gardner. Gardner is a sports agent and married to actress Liv Tyler, the daughter of Aerosmith frontman Steven Tyler.

Here’s what you need to know about Helena Christensen.

1. Helena Christensen Started Modeling as a Child & Was Known as One of the Most Iconic Supermodels of the 1990s

Helena Christensen had one of the most recognizable faces and bodies in the fashion world in the 1990s. She walked the catwalk for Victoria’s Secret for two years beginning in 1997.

Christensen modeling resume includes high-fashion designers such as Chanel, Prada and Valentino. She appeared on the covers of magazines including Vogue, Elle, Harper’s Bazaar and W. According to IMDB, the late Italian fashion designer Gianni Versace referred to Christensen as having “the most beautiful body in the world.”

BADASS issue July 2018 ??@instylemagazine ? @msprouty • I wore this exact Thierry Mugler metal outfit when my dear friend and mentor Herb Ritts photographed me in 1991 for LA magazine. It was a tight squeeze then and it’s a tight squeeze now but I did it ? Thank you for bringing this amazing piece back to me! So excited to be part of this issue with all those true badass girls ❤️@laurabrown99 @juliepelipas @harryjoshprotools @hungvanngo @honeynailz #instylebadasswomen #badasswomenissue

Age has not slowed Christensen down. She frequently shares photos to Instagram showing off her figure, which does not appear to have changed at all over three decades. In June of 2018, she slipped on a metal outfit that she had modeled in 1991, and said it felt the same. Christensen wrote on Instagram, “BADASS issue July 2018 ??@instylemagazine ? @msprouty • I wore this exact Thierry Mugler metal outfit when my dear friend and mentor Herb Ritts photographed me in 1991 for LA magazine. It was a tight squeeze then and it’s a tight squeeze now but I did it ? Thank you for bringing this amazing piece back to me! So excited to be part of this issue with all those true badass girls ❤️”

On March 2, 2019, Christensen bared it all in a photo posted to Instagram. A photo-shopped star covers part of her breast and her hair drapes down over her face. Christensen joked in the caption, “No clean towels..?!”

2. Helena Christensen is a Successful Photographer & Co-Owns a Studio Based in New York City

Helena Christensen has also had a successful career behind the lens of the camera. She is the co-founder of a New York City-based photography studio called Stærk&Christensen. She and business partner Camilla Staerk described their style on their website as such: “Rooted in a Danish design heritage and mid-century modern sensibility, mixed with gothic, mythical themes and the haunting glamour of old Hollywood, the studio executes their signature work inspired by this sphere of influence, nature’s raw materials and their appreciation for original architecture.”

Christensen’s fashion career also included a major role at Nylon magazine. The fashion and beauty magazine published its first issue in 1999 and shut down in 2017. Christensen worked as the magazine’s creative director. She began that job around the same time she gave birth to her son, Mingus.

In a New York Times profile on Christensen in 2000, she is described as a “traveling correspondent” who contributed every month to the magazine but was not in the office on a daily basis. Editor-in-chief Marvin Scott Jarrett told the newspaper, “She goes places and tells us about it, or brings back what’s hot in India, Denmark, Paris, London.” Christensen added that she felt photography was her true calling. “Photography is the most thrilling thing in my life. It’s so much more fulfilling than being on the other side of the camera.”

Am posting about a different kind of love on this special day. The love that I saw between families and friends on my trip to Ukraine as a photographer for the UNHCR where, despite the desperate conditions people face in sub-zero temperatures, they continue to support one another. They welcomed me into their homes, repaired by UNHCR, and treated me with so much warmth and kindness. The love between these people is so inspiring. War might break walls, but love of those who stand together is shatterproof. I’d like to give a shoutout to the organizations and people who support @refugees specially @eu_echo @SWeMFA @GermanyDiplo @MofaJapan_en @NorwayMFA for their amazing generosity in supporting the situation in Ukraine. @refugees #LoveRefugees #WithRefugees #valentinesday @hectornyc #iloveoldpeople

Helena Christensen is involved with the United Nations Refugee Agency and has used her photography skills to raise awareness about crisis’ around the world. Currently, her Instagram profile includes a link asking for donations to help people struggling in Burundi. The website reads, “UNHCR High Profile Supporter Helena Christensen is calling for action to help refugees from Burundi – one of the world’s most forgotten and underfunded crises.”

Christensen traveled to Rwanda in late 2018 to meet with refugees. She told Harper’s Bazaar that she was very inspired by the women she met, who she says were doing everything they could to improve their situation. She explained, “I saw feminism displayed in the most beautiful and powerful way. Women are creating their own small businesses by setting up work studios where they employ other women to help produce clothes and handicraft. In doing so, they’re empowering the entire community of women, enabling them to create a better future for themselves and their families.”

4. Christensen Has One Son Named Mingus

Helena Christensen has never been married. She shares a son with actor Norman Reedus, whom she dated from 1998 until 2003. In a 2009 interview with InStyle Magazine, Christensen explained that she had never lived with a partner before. She told the magazine at the time, “I’m used to my own place, my own things. But if I met the right person, I’m sure I’d be like, ‘Move in tomorrow, put your things everywhere.'”

Her son, Mingus Lucien Reedus, is now 19. Christensen reunited with her ex, Norman Reedus, for their son’s high school graduation in June of 2018.

What a beautiful day ❤️ Grateful for so much but most of all my son, family, close friends and our doggy. It’s pretty friggin cool to be born and get to do this life thing ⭐️

Mingus has gotten involved in the modeling world. He walked the runway for Calvin Klein in September of 2017, but Christensen says Mingus was not interested in pursuing modeling as a full-time career. She admitted to the Metro in a 2018 interview that she was glad Mingus wanted to pursue something else.

Helena Christensen was born on December 25, 1968, in Copenhagen. According to IMDB, her father is Danish and her mother was Peruvian.

Christensen reportedly was interested in pursuing a musical career but began modeling by age nine. At age 16, she became a beauty queen. According to British Vogue, Christensen says she “accidentally” entered the Miss Copenhagen competition. She told the magazine that she had thought the show was for charity. But she ended up winning, then went on to win the title of Miss Denmark in 1987. Christensen competed in the 1988 Miss Universe competition but did not win. 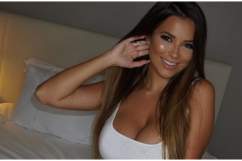