Adam Lambert has achieved worldwide fame as a singer and songwriter. In addition to his solo career, Lambert has performed with the legendary rock band Queen since 2011. Given this mainstream success, some fans may be curious as to how old the pop star really is. According to Famous Birthdays, he is 37 years old.

Lambert was born on January 29, 1982. He began performing with the Metropolitan Educational Theatre at age nine, and landed his first professional gig at 19, when he performed on a cruise ship with Anita Mann Productions. He rose to international fame in 2009 when he got second place on the eighth season of American Idol. He was 27. Lambert released his debut album, For Your Entertainment, soon after, which eventually went gold and included the hit single “Whataya Want from Me.”

Lambert Is 37 & Has Been Releasing Original Music for a Decade

Lambert has released two more studio albums since then, and appeared as a judge on the 2016 season of The X-Factor. He reflected on getting older and changing during a recent interview with the Guardian. “I’ve got myself pretty well sorted. I get who I am. I can call myself out, but man, these hangovers last way too long, don’t they?” he said. “I do feel my age, but in some ways, it’s a bit of a Peter Pan thing. I play dressup and sing for a living.”

Lambert also said that his age has influenced his musical style. “It’s still me. I’m still the same guy. I have my instincts. They’re never going to change. Some of the references and inspirations have shifted,” he explained. “Six years ago, I was really in love with glam rock from the 1970s with really outrageous outfits. I had sort of a campy delivery. As an artist, I’ve evolved.”

Lambert Is 6’1″ & Taller Than His Queen Predecessor Freddie Mercury

“I’m more based in reality than fantasy now,” he continued. “In terms of production and visuals, this is the biggest show I’ve done on my own. We’ve worked hard to put together great lighting and video with a strong sense of fashion. It’s pulling from different areas. It’s contemporary. Modern pop music is very different form what pop was 30-40 years ago stylistically.”

According to Healthy Celeb, Lambert is 6’1″. This makes him taller than several of his pop star peers like Justin Beiber, Bruno Mars, and Harry Styles. He is the same exact height as Justin Timberlake. Lambert is also taller than his Queen predecessor Freddie Mercury, who was 5’10”. Lambert talked about Mercury’s influence on his own career, and how much pressure he felt stepping in for the late icon.

“There’s a few of them [songs] that really hit home from me,” Lambert told Good Morning America. “In learning more about Freddie over the years and learning that there was definitely a loneliness there, I feel like I have enough in common with some of the things Freddie was going through.” 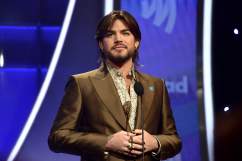