Queen is still going strong after five decades. The legendary rock outfit is the focus of a new documentary, The Queen and Adam Lambert Story, which details their collaboration with the pop star and their subsequent lineup changes. The latter topic has led many to ask: who are the members of Queen today? Which artists comprise the 2019 iteration of the band?

Today, Queen is made up of Lambert and founding members Brian May and Roger Taylor. Lambert is the lead singer, while May and Taylor take up lead guitar and drumming duties, respectively. This version of the band has been active since 2009, when Lambert joined May and Taylor for an American Idol performance. The other touring members include keyboard player Spike Edney, bassist Neil Fairclough and percussionist Tyler Warren.

Prior to Lambert, Paul Rodgers was the band’s lead vocalist. He took over singing duties in 2004, and toured extensively with the other two members. Each of their live album releases; Return of the Champion, Super Live In Japan, and Live In Ukraine, were well received by fans. Rodgers left the band in 2009, though he didn’t rule out the possibility of performing with May and Taylor in the future.

In 2012, Taylor said that Lambert was more suited to the Queen sound than Rodgers. “Paul has one of the greatest rock voices but it’s more blues and soul orientated I would have thought,” he told the Toronto Sun. “I would say, with all due respect to Paul, that Adam is more suited to a lot of our material and whereas we had great tours with Paul, I think Adam is more naturally at home with us.”

Both Lambert and Rodgers have had to contend with the legacy of Queen’s original frontman, Freddie Mercury. Mercury is considered to be one of the most explosive and charismatic performers in rock history, and he penned several of Queen’s biggest hits before his death in 1991. Six years later, the band released “No-One but You (Only the Good Die Young)” as a tribute to Mercury and other musicians who died too soon.

“When Freddie died, it was like losing a family member, and we all handled it in different ways,” May told the Telegraph in 2002. “For a time, I really wanted to escape from Queen; I didn’t want to know about it. I think that was my grieving process. But I’m very proud of what we did together. My God, we really did go on some interesting excursions! Mostly, it makes me feel good.”

John Deacon, the band’s original bassist, retired in 1997. Often referred to as Queen’s ‘lost member,’ Deacon has kept his personal life under wraps for the past two decades. May told the Daily Mail that he hasn’t even made contact with Deacon since he left the band. “It’s his choice. He doesn’t contact us. John was quite delicate all along,” he explained.

“I haven’t heard a squeak from John,” Taylor added. “Not a single guttural grunt. We’re not in touch, but John’s a sociopath, really, and he’s given his blessing to whatever Brian and I might do with the brand. And we’ve done rather a lot.” 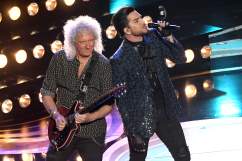