The 2019 BET Awards are tonight, with actress Regina Hall as the show’s host. The night is set to be filled with some of the biggest names in entertainment. Mary J. Blige is picking up this year’s Lifetime Achievement Award and Cardi B leads with the most nominations, at 7. But, let’s get into the performances and what to expect. Read on for a rundown on the performers line up, as well as the presenters.

In addition to the Lifetime Achievement Award and the usual categories, Tyler Perry and the late Nipsy Hussle will also be given awards tonight. Perry is picking up the Ultimate Icon Award, while Hussle is being honored with the Humanitarian Award. 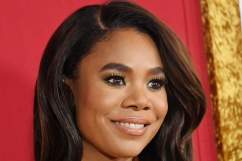 Ahead of the show, host Hall dished to Hollywood Life about some of the performances she’s eager to see and what they involve. Hall gushed, “I’m always excited about the performances. I think that’s what always makes the show so good, so I’m excited to see Cardi B. I’ve never seen her perform live before so I can’t wait to see her. I have been having so much fun listening to Cardi B, her music is really great. And I’m excited for Lizzo — she is a lot of fun and she’s going to be on the show too, so that’s really exciting.”

She continued, “I love all my originals so I am very excited to hear the Mary J Blige tribute. I love so many songs of hers, so I can’t wait to see other artists salute her and pay tribute to her. And there are some up-and-coming artists that I can’t wait to see. All of the performances are going to be really fun.”

Read More
BET, BET Awards, Celebrities, TV
It's the 2019 BET Awards and there are a bunch of big performers lined up. Read on for the rundown on the performances and the presenters as well.