Hannah Godwin and Dylan Barbour are two of the cast members who are hitting it off on season 6 of Bachelor in Paradise. But, Godwin, aka Hannah G., has been a hot commodity fresh out the gate on BIP 2019. There are a ton of guys who would love to date her on the show … and Barbour is one of them. But, before we get into the details on them, whether or not they’re still together, and show spoilers, THIS IS YOUR MAJOR SPOILERS WARNING.

STOP READING NOW IF YOU DO NOT WANT TO KNOW WHAT HAPPENS TO GODWIN AND BARBOUR THIS SEASON.

When Horstmann first saw Hannah Godwin, as he arrived in Paradise, he talked about being attracted to her and said she had an incredible body. He also said she has a great personality. Barbour then showed up and Godwin told her friend Katie Morton that she thinks they’re both really cute. In addition to Horstmann, there were other men who arrived in Paradise and had their eyes set on Godwin. Wills Reid was one of them. But, Godwin was initially into Horstmann, saying that she and Horstmann definitely “vibe”.

Dylan Barbour Lucks Out With Godwin

yeah Chris I’m surprised to see you too ? Tune in tonight on ABC! 8pm PT|ET

Horstmann got the first date card of the season but he took Tayshia Adams on the date, which was fortunate for Barbour, who said he only wanted to date Godwin in Paradise. He said he wasn’t interested in anyone else on the show and was bummed out at the thought that Horstmann could ask out Godwin. So, when Horstmann asked out Adams instead, Barbour was ecstatic. Meanwhile, Godwin was upset, admitting to cameras that she had been getting to know Horstmann for a few months, prior to filming. She said she felt blindsided.

While Horstmann was on a date with Adams, fellow cast member Caelynn Miller-Keyes revealed that Horstmann had been talking to and dating multiple cast members prior to filming. One of them was Godwin, so Dylan Barbour was definitely a better option for Godwin.

When Barbour sits down with Godwin, he admits to being nervous and “very into” her. Godwin then tells him he has an amazing and cute smile. So, of course, in true BIP fashion, the two start making out. Barbour told Godwin that he had wanted to do that for “so long” and he told the cameras that it was the best night of his life.

It’s not an easy road for Barbour with Godwin this season, as she also decides to pursue romances with cast members Horstmann and Reid as well. Reality Steve reported that during this season, “Blake tells Caelynn and Tayshia that he wants to pursue Hannah G. Hannah is already pretty close with Dylan at this point, so nothing ever comes of Blake & Hannah, although at the rose ceremony, they’ll probably make it seem like Hannah was choosing between Dylan and Blake.”

Fortunately for Barbour, there is love in the cards for him and Godwin by the end of the season and the two get engaged, as reported by Reality Steve. 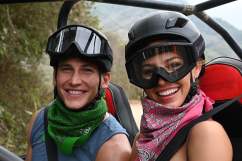 Blake Horstmann and Kristina Schulman Spoilers on ‘Bachelor in Paradise’

Read More
Bachelor In Paradise, Reality TV, The Bachelor, TV
Hannah Godwin, aka Hannah G., and Dylan Barbour are hitting it off on Bachelor in Paradise 2019. So, do the two get engaged on BIP? Are they still together?