The 2019 Teen Choice Awards airs live from Hermosa Beach, California tonight and Footwear News has reported that this is the 20th anniversary of the TCAs. Read on for the rundown on who is hosting, what time the show airs, when the red carpet starts, what channel to watch the show on, who is performing, and more.

TEEN CHOICE AWARDS 2019 RED CARPET: Prior to the awards, there will be red carpet arrivals and a pre-show, but the pre-show will not be televised. It will, however, be streamed live online. The pre-show will start streaming at 7 p.m. ET/4 p.m. PT on Twitter and you can access the Teen Choice Awards Twitter here.

HOW TO WATCH TEEN CHOICE AWARDS 2019 ONLINE: If you would like to watch the Teen Choice Awards online, there are several live streaming options for you, with or without cable. Find instructions on how to watch here.

TEEN CHOICE AWARDS 2019 HOSTS: This year’s hosts are Teen Choice Awards veteran Lucy Hale and Choice Male Web Star nominee David Dobrik. Hale is currently gearing up for her leading role on the new Riverdale spinoff Katy Keene and even has to move to New York in order to be a part of the show. Hale told Parade that, “I’m so excited that we actually get to film in New York City because usually shows don’t always get that opportunity. You shoot a different place for a different place … And the show is obviously from the creators of Riverdale, but this show is just completely different. It’s almost fairytale-like, and it’s very bright and happy and it follows four of these friends who are trying to make their different dreams come true in the city. And it’s about the ups and downs of being in your mid-’20s and about heartbreak and how difficult life can be sometimes and how your friends sort of get you through that. And there’ll be musical numbers.”

She continued, “The cast is amazing and I’m really excited. I feel like this will be a really cool new chapter for me. I’m scared and excited to move to New York, but I’m really looking forward to it.

TEEN CHOICE AWARDS 2019 PERFORMERS: When it comes to this year’s performers, they include Blanco Brown, OneRepublic, Bazzi, Mabel, Jordan McGraw with Sarah Hyland, CNCO, HRVY, Monsta X, and Zhavia. Blanco Brown will be performing “The Git Up,” OneRepublic is singing “Rescue Me”, Bazzi will deliver the song “Paradise”, Mabel is singing “Don’t Call Me Up” and McGraw’s duet with Hyland will be “Met At a Party”.

Presenters for the awards show have not been announced. 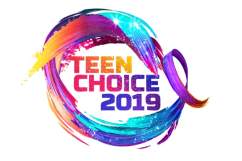