Another day, another Kanye West delay. After months of build-up and teasers, West announced that he would be dropping Jesus Is King on Sunday, September 29. Much to the chagrin of fans, the release date yielded no new music. West has yet to address the delay, or when he actually plans on dropping the album.

Needless to say, Twitter users were not pleased. Many of them chastised West for getting their hopes up a second time, and feel that he should’ve delayed the album more than two days. “Can’t believe I fell for it. Despite knowing better and clowning fans for falling for it the last few albums, I let @kanyewest fever infect me,” wrote @broheezy76. “Should’ve known Jesus Is King wouldn’t drop timely. Should’ve known not to trust the 2nd drop date either.”

So he just not gon drop the album when he said he would ?? I feel so betrayed ? #JesusIsKing #KanyeWest #tiredoflies pic.twitter.com/SKrtB4pPNQ

An actual picture of me rn refreshing the page in the library thinking Kanye is actually gonna drop tonight #JesusIsKing #CLOWN #KanyeWest pic.twitter.com/E03LM6QqGA

@kanyewest cus he lied to us about Jesus is king and Yandhi ?? pic.twitter.com/RAgQZolm0D

Other fans decided to take a more optimistic approach. They saw the lapsed release date as confirmation that West is taking his time with the album, and that we will get a finely crafted product whenever he decides to put it out. “Album not dropping tonight probably means the final result will be slightly different and more polished,” wrote user @griefstreetusa. “More complete. Maybe new body? Its still good news imo.”

User @DanPrice1 suggested that West needs more people helping him when it comes to public announcements and meeting deadlines. “Dude, you need someone to help organize the logistics of your releases a little better,” he pointed out. “Hire me, I’ll make sure Nicki has her verses done before we announce, and I’ll upload the albums for u too.” The comment about Nicki Minaj is in reference to her appearance on the track “New Body,” and how she has reportedly yet to re-record her verse.

Me tryna holla at @kanyewest to tell him to drop #JesusIsKing pic.twitter.com/SuOlT13JXJ

@kanyewest I hate you but u still my fav artist #JesusIsKing ? pic.twitter.com/app8Co10ez

Me waiting for Jesus is king to drop because @KimKardashian says so pic.twitter.com/5sPRTcwbqF

I ain’t even pay this much attention to the real #JesusIsKing when I went to church as a child, now @kanyewest got me up here using the word ‘Jesus’ more than I ever thought I would,” tweeted user @donnii_e. “Wake Up, Mr West and drop the album!!!”

Despite the delay, fans who attended the listening sessions that West hosted during the weekend say the album is worth the wait. Andrew Barber likened the album to West’s previous releases, only with a gospel spin. “The beats on Jesus Is King sounded fire. He definitely pulled from elements of previous sounds that people loved from WTT, 808s, Yeezus, Cruel Summer & MBDTF and put a gospel spin on them,” he wrote. “Of course I need to hear them again, but they were knocking on the sound system he had.” 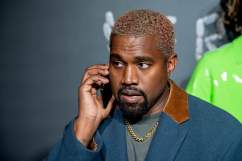