Kanye West has fans on the edge of their seats. His new album Jesus Is King was set for release at midnight on Friday, but the release time came and went. West’s publicist has claimed that the album is still on its way. While the true fate of the album remains to be seen, we will provide details on the roll-out once information is made public.

Jesus Is King was originally set for release at midnight EST on Friday, September 27, but Kim Kardashian has announced that it will come out on Sunday due to a few last minute tweaks. West will be hosting a listening party in New York shortly before the album’s release.

West’s Album Was Originally Set for Release on Friday, September 27

Generally, albums become available around midnight EST on platforms like Apple Music and Spotify. This has been the case for other high profile releases like Drake’s Scorpion or Taylor Swift’s Lover. On occasion, these platforms will throw a curveball at listeners, and few artists have thrown more curveballs that Kanye West.

Take West’s 2018 album Ye for example. It was originally scheduled for release at midnight on June 1, but it wasn’t made available until the following afternoon. A similar thing happened with NASIR, a Nas album that West produced. While the album was set to be streamed online, and then released to fans, it was delayed by several hours, and eventually landed on streaming platforms in the middle of the night.

Even when West releases albums at a proper time, as he did with 2013’s Yeezus and 2016’s The Life of Pablo, he will continue to make tweaks and revisions to the mixes. We have every reason to believe that Jesus Is King will be more of the same.

The Album Is Set for Release on Sunday, September 29

2 more days (maybe unless the album gets pushed back)…. who’s ready? ??‍♂️kanyewest

The speculation regarding the album’s delay was sparked by an unnamed source who spoke to Variety. The source claims that Def Jam executives have been talking with West, though it is unclear whether they were encouraging the delay or trying to get the album completed in time for its Friday release.

The rumors were compounded by a tweet from New York Times critic Joe Coscarelli. “It’s Kanye so who knows but I’m hearing from many industry people that Jesus Is King is not coming on Friday,” he wrote. “Despite people on the ground in Wyoming trying to make it happen……..” Coscarelli’s tweet has not been addressed by West or his wife, Kim Kardashian.

Rather than confirm the delay, Kardashian has doubled down on the release date, and went as far as to retweet a post that read, “2 more days… Jesus Is King.” The tweet originated from an account that West follows. Kardashian has been the main source of information for the album, as she announced the title and posted a photo of the tracklist on her social media.

As we wait for the album to be released on Sunday, be sure to check out the Twitter reactions to the delay, and what fans are saying about the rapper’s controversial roll-out. 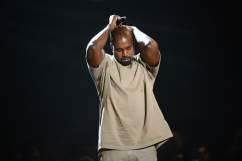 Twitter Reacts to Delay of Kanye West’s ‘Jesus Is King’