TLC/YouTube Travis Henry, the star of tonight's episode of "My 600 Lb Life," started working with Dr. Now to lose some weight in order to give his wife her dream wedding.

Travis Henry, a Texas native who weighs just over 600 pounds, is the subject of tonight’s episode of My 600 Lb. Life. After realizing he couldn’t walk down the aisle at his own wedding, Travis decided to seek out the help of celebrity bariatric surgeon Dr. Younan Nowzaradan in an attempt to lose some weight and give his wife the wedding of her dreams.

The TLC description of Season 8 Episode 6, titled “Travis’s Story,” reads, “When Travis got too big to walk down the aisle, he promised to give his wife a proper wedding one day. Since then he’s only gained weight. Now, Dr. Now is Travis’s only hope to lose weight and get the life he and his wife dreamed of having together.”

Travis’s episode airs tonight, February 5, 2020 at 8 p.m. EST/7 p.m. CST on TLC. Here’s what we know about the reality star ahead of tonight’s debut (Warning: some spoilers on Travis’s journey ahead! Turn back now if you don’t want anything ruined for you before the episode airs!):

Travis Says He Can’t Stop Eating Once He Starts

The clip above introduces Travis, who discusses his food addiction with the film crew; the reality star tells the cameras that he feels like he can’t stop eating once he starts. The promo shows Travis attempting to get dressed and struggling to pull his shirt over his head while his wife Yasmin cooks him breakfast.

“I enjoy eating, I look forward to it probably more than most people,” the reality star tells the cameras. “And more than I should,” he adds. “Once I start, it’s very hard for me to stop, so I eat all day long. But that first meal is always the best because I love breakfast, and I can’t wait for Yasmin to bring me my first serving so I can get to it.”

The cameras pans over Travis as he devours his heaping plate of pancakes, bacon, sausage and eggs, while the reality star adds, “Once I start eating, it’s like this wave of happiness comes over me, and I can never get enough of it. So when I finish one meal, I have to get to my next meal.”

He continues, saying Yasmin leaves him with snacks when she leaves for work, but the snacks aren’t enough to fill him up, so he “usually has something delivered.” The clip shows Yasmin cleaning up after her husband while he leans back with his hand on his belly and yawns. The reality star then says, “So I just keep it going, because I want that feeling all day long. I need what food does for me. It takes the pain and fear of what’s going to happen to me away.”

Travis Turned to Food to Cope With Abandonment Issues 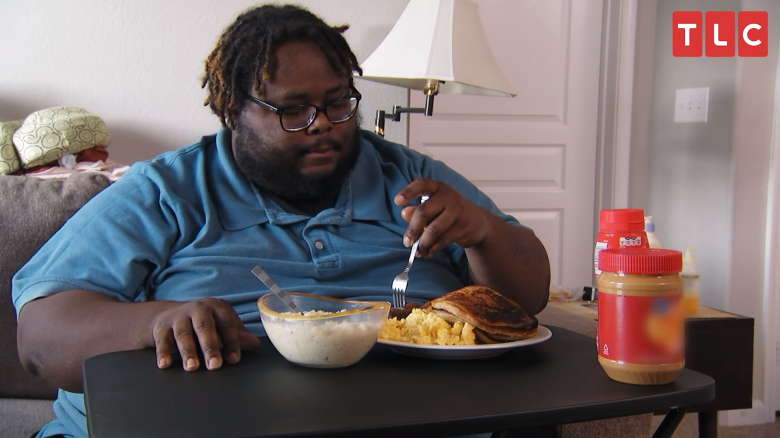 Travis Henry sits down to eat his favorite meal of the day – breakfast.

The episode, which is available for early viewing on the TLC website (with an account), dives deeper into the issues that led to Travis’s weight gain in the first place. He notes on the show that parents split up when he was young, so he was raised primarily by his older brother. Due to the lack of parental supervision, Travis was able to eat as much as he wanted, which led to complications and serious weight gain later on. By the time he was 10-years-old, Travis weighed 120 pounds.

“That’s when it got worse,” he explains during tonight’s episode, adding that his brother eventually moved out to live with their dad again. “My brother and me were close and I felt so betrayed. I couldn’t understand how my brother could leave me like that and why my dad didn’t want me.”

Travis started turning to food as a coping mechanism to comfort himself and deal with his abandonment issues. By age 15, the reality star was too heavy to get behind the wheel of a car, and by his 20th birthday, he weighed 450 pounds. Five years later, at over 500 pounds, Travis met the love of his life while attending church. The two quickly fell in love and were married six months later, but Travis wasn’t able to walk down the aisle due to his weight. 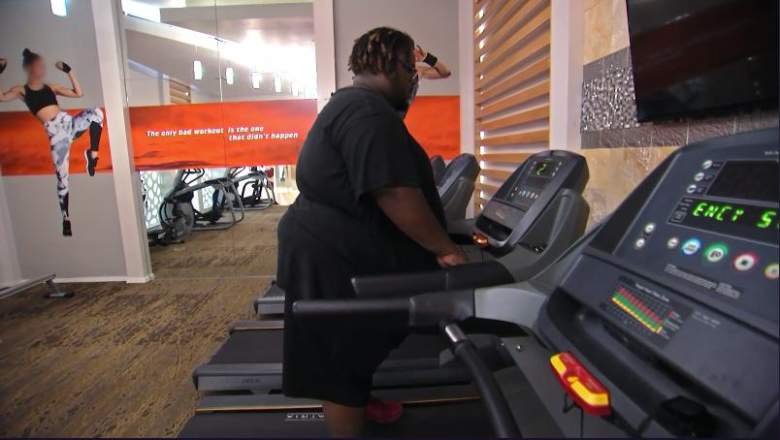 Travis Henry, star of tonight’s episode of “My 600 Lb Life,” lost over 200 pounds by the end of his journey.

Because he couldn’t walk down the aisle with his wife at their wedding, he decided to make a change in order to give his wife the dream wedding he says she deserves. And boy does he work for it! According to Distractify, Travis ends up being approved for his weight loss surgery after just two sessions with Dr. Now (losing more than 100 pounds in four months), and in the end, the reality star loses a total of 221 pounds. His final weigh-in puts Travis at 379 pounds.

It’s unclear at this time if Travis and Yasmin were able to have their fairytale dream wedding; we weren’t able to locate a social media page for either of the two, but it’s clear that Travis worked very hard to shed some weight and get his life back on track while working with Dr. Now, so we expect he is continuing his journey today.

Read More
My 600 lb Life, Reality TV, TV
Travis Henry, the star of tonight's episode of "My 600 Lb Life," started working with Dr. Now to lose some weight in order to give his wife her dream wedding.