Country music legend Merle Haggard died on April 6, 2016, at his home in the San Joaquin Valley, California, after a brief battle with pneumonia. He died on his 79th birthday. The beloved country star recorded more than three dozen No. 1 hits in his musical career, which spanned six decades from the 1960s into the 2010s.

Haggard actually predicted he would die on his birthday, according to his son Ben Haggard.  Here’s what we know about Haggard’s death: 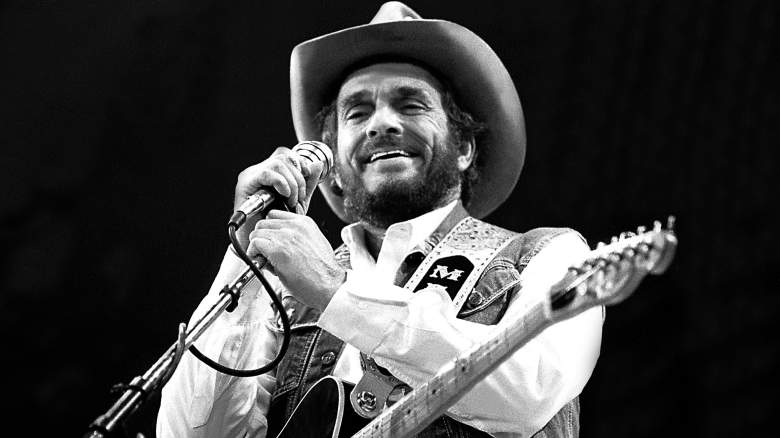 A&EMerle Haggard died on April 6, 2016, after a brief battle with pneumonia.

Haggard had a history of illness leading up to his death, including clogged arteries and lung cancer. The country icon underwent angioplasty in 1995 to unblock his arteries, according to Cleveland.com. In 2008, Haggard was diagnosed with lung cancer and had part of his lung removed; however, he was back on his feet within two months of the lung procedure and continued to tour until shortly before his death.

In December 2015, Haggard was treated for a bout of pneumonia, and although he recovered, he was forced to postpone several concerts. He was hospitalized again in March after he continued having issues breathing, and just a few short weeks later, Haggard died in his California home due to complications with the respiratory infection.

Haggard Predicted His Own Death, According to His Son

According to Haggard’s son Ben, the country music legend predicted his own death shortly before he passed. After canceling several of his April concerts due to continued complications with pneumonia, he told his son that he expected to die on his birthday, April 6. Ben Haggard took to Facebook to share the heartbreaking story alongside an emotional picture of the two holding hands on his deathbed.

“A week ago dad told us he was gonna pass on his birthday, and he wasn’t wrong. A hour ago he took his last breath surrounded by family and friends,” Ben Haggard posted on Facebook the day of his father’s passing. “He loved everything about life and he loved that everyone of you gave him a chance with his music. He wasn’t just a country singer.. He was the best country singer that ever lived.”

Haggard’s death was felt deeply across the globe, with millions of fans, celebrities, and musicians paying tribute to the country star. However, fellow country music legend Willie Nelson took the news of Haggard’s death particularly hard, as the two were as “close as brothers,” according to a 2014 Rolling Stone interview with Haggard.

“He was my brother, my friend. I will miss him,” Nelson captioned a photo of the two together on the day of Haggard’s death. He also added a link to a YouTube video of the beloved hit single “Poncho and Lefty,” which the two recorded together in 1983.

As a songwriter, Nelson called Haggard “one of the best,” Rolling Stone reported. Nelson took part in a tribute concert for his dear friend on April 6, 2019, alongside dozens of other country music artists, including Billy Gibbons, Dierks Bentley, Hank Williams Jr., Kenny Chesney, Miranda Lambert, and Toby Keith.

Haggard’s eldest daughter, Dana Haggard, died almost two years to the day after her father on April 10, 2018. She died in her sleep at 61 years old. Ben Haggard also shared the news of his half-sister’s death on social media, posting a sweet photo of Dana holding her father’s arm while the two smile at the camera.

“My oldest sister Dana passed away yesterday. This photo absolutely broke my heart, I know she’s hugging dads arm again. I’ll miss you sister RIP,” he captioned the Instagram post above. He believes Dana died of heartache from missing their father.

“It could have been heartache,” Ben said of his sister’s death, according to The Boot. “We just had the second anniversary [of our father’s death], and she was missing the old man. Who knows?”

On what would have been @MerleHaggard's 80th birthday, artists come together to pay tribute to his career. Don’t miss tonight’s concert salute to this country music legend at 11/10c on @AETV. #StorytellerBirthday #MerleHaggardAE pic.twitter.com/33rQwIoyQY

A&E is airing a tribute to Haggard on Monday, April 12, at 11 p.m. ET/10 p.m. CT. The description for the Haggard tribute reads, “Captures the most iconic moments from a one-night-only concert event honoring Merle Haggard and his music on what would have been his 80th birthday. Packed with captivating live performances, never-before-seen interviews and exclusive behind-the-scenes footage with some of music’s biggest superstars.”

The tribute, which celebrates Haggard’s life and long, successful career, also features an all-star sing-along performance of “Okie from Muskogee,” as well as dozens of interviews, exclusive never-before-seen footage and special performances from some of country music’s biggest stars, according to the site.

Merle Haggard: Salute to a Country Legend airs Monday night at 11 p.m. ET on A&E. In the meantime, keep up with all the latest in TV coverage and entertainment news here.