Getty Images The logo for Jeep

Bruce Springsteen made his debut in a Super Bowl commercial — and it was a big one.

The 71-year-old music icon narrated and appeared in a  game-day ad for Jeep, titled “The Middle.” In the ad, the Grammy-winning musician encouraged Americans to meet each other half way after a tumultuous year.

Here’s what you need to know about the ad.

Springsteen starred in and narrated the heartwarming two-minute ad, which featured footage of two vintage Jeep models, a 1980 Jeep CJ-5 and a 1965 Willys Jeep CJ-5, ahead of the automaker’s 80th anniversary later this year.

In the clip, “The Boss” made his way to a chapel located in Lebanon, Kansas, which he revealed is located at “the exact center of the lower 48” states.

“It never closes,” Springsteen said of the small church. “All are welcome to come meet here…in the middle.”

“It’s no secret … The middle has been a hard place to get to lately,” the singer continued. “Between red and blue. Between servant and citizen. Between our freedom and our fear. Now, fear has never been the best of who we are. And as for freedom, it’s not the property of just the fortunate few; it belongs to us all … We need the middle.”

The message of hope ended by touting “The ReUnited States of America.” 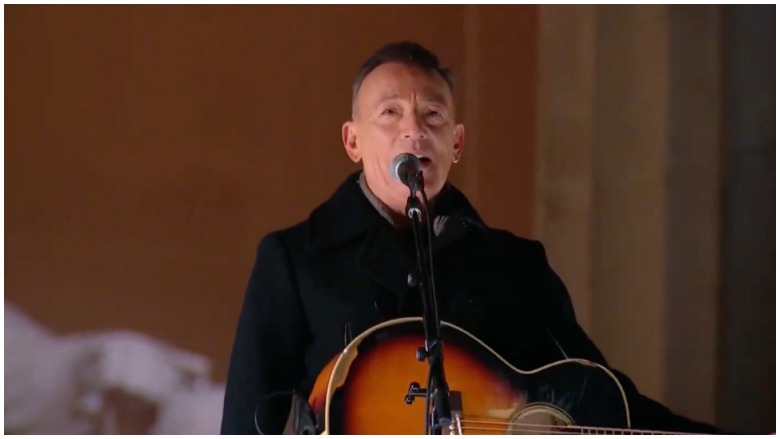 Springsteen is not known as an ad man. The only time he may have ever inadvertently promoted a product was when he read aloud a wine promotion while visiting the studio of Philadelphia rock radio station WMMR in 1974,  according to Variety.

“Since that moment, I don’t think he’s ever endorsed a commercial or a product,” said Louis Masur, a professor of American studies and history at Rutgers University.

Once Springsteen got on board with Jeep. the commercial happened fast. The outlet reported that the “Born to Run” singer only agreed to film the commercial in early 2021. It was shot on location just one week before Super Bowl Sunday.

Ahead of the Jeep spot, Springsteen’s manager, Jon Landeau, turned down a decade worth of pitches from Stellantis CMO, Olivier Francois. The automotive executive revealed that Landeau told him Springsteen once turned down a “ton of money” from Chrysler CEO Lee Iacocca and that he would probably never say yes to anything ad-related.

But when he saw the idea for the 2021 Jeep commercial, Springsteen looked at it “as a prayer.” He stunned everyone by saying yes.

While Jeep offered to let Springsteen film his scenes in his New Jersey hometown then edit in footage filmed at the Kansas church, the singer wanted to go to Kansas.  Because he didn’t want any of his own songs to distract from the message, he instead produced a score.

Francois added of Springsteen, “It took me ten years to get him in, but once he was in, he was all in.”