Beloved Jeopardy! host Alex Trebek died on Sunday after battling pancreatic cancer. Trebek’s death was first reported by TMZ and the game show confirmed his passing on its official Instagram page, writing, “Jeopardy! is saddened to share that Alex Trebek passed away peacefully at home early this morning, surrounded by family and friends. Thank you, Alex.” He was 80 years old.

Jeopardy! is saddened to share that Alex Trebek passed away peacefully at home early this morning, surrounded by family and friends. Thank you, Alex. Read more in the link in our bio.

The longtime game show host was diagnosed with stage 4 pancreatic cancer, announcing it publicly in March 2019. Trebek was born in Sudbury, Ontario, and was best known for hosting Jeopardy! since 1984, winning many awards during his tenure, including Daytime Emmys.

He’s survived by his wife, Jean Currivan Trebek, their two kids Matthew and Emily, and his adopted daughter from a previous marriage, Nicky. He was very close with his kids, and his daughter Emily frequently spoke about the close relationship she had with her father.

Here’s what you need to know about Emily Trebek:

Emily was born in 1993 to Trebek and his wife Jean Currivan Trebek, who is a metaphysicist. Trebek and Jean were friends for a while before they started dating. In an interview with People, Jean said, “There was just this deep sensitivity about him with a gruffy exterior. I kept thinking, he’s 24 years older than me .. but there was something that just kept drawing me to him.”

The two eventually started a romantic relationship and in 1990, they tied the knot. In the interview with People, Jean spoke about Trebek’s great sense of humor. She said, “He takes his job very seriously, but won’t take himself too seriously. He’s just an intelligent human being. Part of Alex’s staying youthful is his staying curious.”

Trebek told People in 2019 that he was “pretty satisfied” with his life. He said, “But my wife Jean and I have been together almost 29 years, and I was thinking about President Bush when he died, and all the comments about his life about what a nice guy he is, and how he and his wife had been together 73 years. I thought, oh my gosh … if I’d just met Jean in my 20s we could have had a longer life together.” Trebek also joked that if he met Jean in his 20s, she wouldn’t have been born yet. 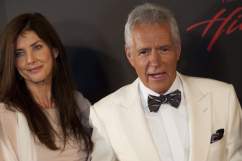 For Father’s Day, I wrote an article dedicated to Alex and our family… and I can’t help but think that our little family was meant to be! You can read my article on insidewink.com 💖 And thank you to those who corrected my grammar – much appreciated and noted! #fathersday @insidewinker #dadrocks #alextrebek #lovemylittlefamily #jeopardy #trebekfamily #iadorethem

Emily has two siblings, brother Matthew Trebek and adopted sister Nicky Trebek. Matthew is Emily’s older brother, born in 1990. Matthew graduated from Fordham College in 2013, and he opened up a restaurant called Oso in Hamilton Heights, Harlem, according to Nicki Swift.

Oso is a Mexican food restaurant, and in an interview with Fordham Magazine, Matthew explained his vision for it: “The idea behind Oso was to take the street fare we loved [in Mexico City] and turn the dining experience into something communal rather than personalized.”

Matthew has also opened up a pizzeria, Pizza By Lucille, and a coffee shop and cocktail bar, Lucille’s, according to Nicki Swift.

When Trebek married his first wife in 1974, businesswoman Elaine Trebek Kares, she already had a six-year-old daughter, Nicky, from a previous relationship, Nicki Swift reported. Trebek and Nicky grew close, and the game show host ended up adopting her and giving Nicky his last name. Although his marriage with Elaine ended in 1981, Trebek and Nicky remained very close.

Nicky works in the entertainment industry filling many different roles, including Production Coordinator on Jeopardy! and hosting infomercials. According to her social media, Nicky is a songwriter and artist.

3. Emily Is a Realtor & Owns an Interior Design Business

Portraits are here, so a great time to introduce ourselves. Hi! We’re Emily & Sam behind E&S interiors. So excited to share all of our projects in the works. Thank you for following along!

Emily graduated from Loyola Marymount University in 2015 and she works as a realtor in Los Angeles for Compass. Her bio on the company’s website states:

With Emily’s background in residential design and property development, she brings a unique perspective to her buyers and sellers. Whether a client is looking for an investment property or a turnkey home, Emily knows exactly what to look for and how to fulfill her clients’ wish lists. When it’s time to sell, her attention to detail and knowledge of current trends help realize the property’s true potential and market appeal in order to sell quickly and for top dollar.

She has been involved in many million-dollar realty transactions, including a nearly $1.5 million home in Culver City and a $1 million house in West Hollywood. In an interview with Jeopardy!, Emily said, “I have always been interested in homes. When I was little, I wanted to be an architect. After graduating, I decided to get into real estate.”

Besides working as a realtor, Emily has an interior design studio based in Los Angeles called E&S Interiors.

4. She Gained Inspiration from Her Father & She Remained Very Closed to Him

The worst of times bring out the best in people. We've got proof. This month we feature 6 everyday heroes including Jean's daughter Emily. Read about the heroes here: https://www.insidewink.com/2020/04/25/how-the-worst-of-times-brings-out-the-best-in-people/ Then tell us who your everyday heroes are! We look forward to meeting them. #insidewink #everydayheroes #emilytrebek #machafrench #juliandiaz #susanhedlund #fedexshelley #maggierouge #sharethegood

Trebek enjoyed working around his home doing his own renovations, including electrical and carpentry work, according to a Jeopardy! interview. When Emily showed interest in house flipping and realty, she looked to her dad for guidance.

In the Jeopardy! interview, Emily said, “As I was getting ready to flip my first house, I told my dad that I wanted to do it with him. If dad can fix something, he will not have anyone else do it. I remember back when I was learning to drive, and I would accidentally run over a sprinkler head or path lighting in the driveway, we all knew dad would be out five seconds later fixing it. And I always watched him fix things, and wanted to learn.”

Emily said that her dad came to her open house showings. “He would look in crawl spaces, in electricity panels, at water heaters,” she said. “He was looking in all those places where a lot of hidden costs could be. So it was helpful for him to be there at every house.”

5. Emily Remained Close With Her Father Until His Death

#HappyFathersDay! Today, Emily Trebek, Alex’s daughter, shares this memory about him: “When I was little, going to work with my dad was one of my favorite things to do. In our downtime on set, I loved to color and would often draw him several pictures and hang them all over his office as decoration. One morning, I drew him this ‘World’s Greatest Dad’ sign. He’s kept it on the front of his office door ever since, even 18 years later. I’m so proud to be his daughter. He is the most caring and supportive father and truly is the World’s Greatest Dad.” 👨👧

Emily attributes a lot of her success in realty to her father. In the Jeopardy! interview, she said, “I don’t have words to express how much it means to me that he helped. Just telling him how much I appreciate it and how much I thank him for guiding me through this and helping me sounds so insignificant. I don’t have the words to make it sound as significant as I feel.”

In 2016, the official Jeopardy! Instagram page shared Emily’s father’s day message to Trebek. The post can be viewed above and it reads:

When I was little, going to work with my dad was one of my favorite things to do. In our downtime on set, I loved to color and would often draw him several pictures and hang them all over his office as decoration. One morning, I drew him this ‘World’s Greatest Dad’ sign. He’s kept it on the front of his office door ever since, even 18 years later. I’m so proud to be his daughter. He is the most caring and supportive father and truly is the World’s Greatest Dad.