Hallmark and GAC Family star Jen Lilley just gave birth to a baby girl. She said the birth was so dramatic and unexpected that she’s not sure if the baby would have survived if she hadn’t made certain last-minute choices.

She Wasn’t Even Sure She Was in Labor at First 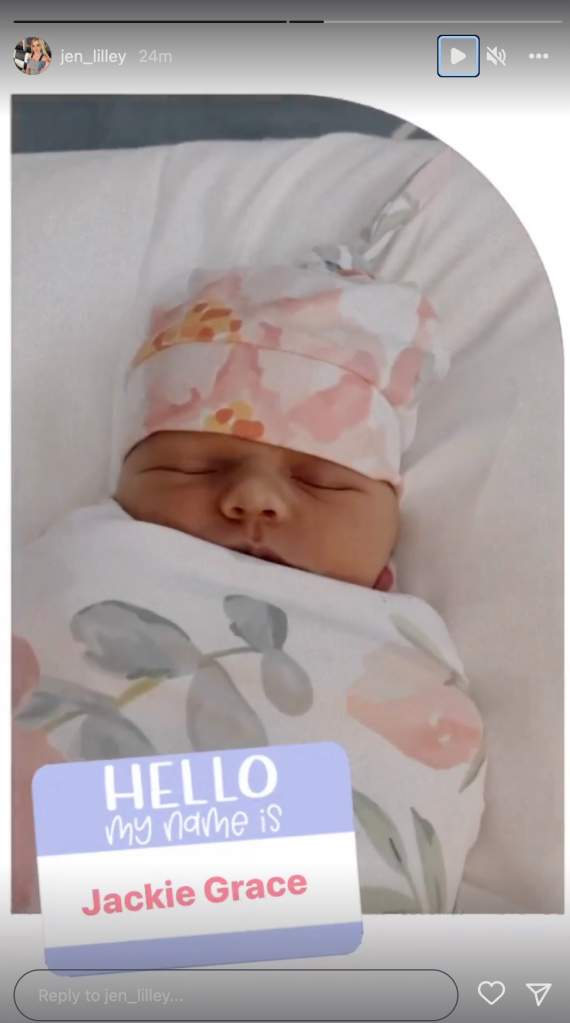 InstagramScreenshot of a video Jen Lilley shared on her Instagram Story

Jen Lilley told People that the labor happened so fast, she wasn’t even sure she was actually having a baby at first.

“I had no idea if I was really in labor,” she told People. “I had Jackie seven minutes after pulling up to the ER. If I hadn’t left when I did, I would have had her in the car, and I’m not sure she would have survived.”

She wrote on Instagram: “Y’all aren’t going to believe this birth story 😳😳 sneak peak via the link in my bio. Details coming out next week on @people, but we thought we’d let you know miss Jackie Grace safely arrived yesterday morning and we couldn’t be more in love 🧡.”

She told People that when her midwife told the nurses to get her pants off right away, she was confused because she truly didn’t think the baby was coming “right now.”

She added that she and her husband, Jason, were surprised when the midwife started commenting on how much hair the baby had.

“I thought, that would be a strange thing to joke about, and realized, I was actually having the baby right NOW,” she said.

Jen Lilley and Jason Wayne named their daughter Jacqueline “Jackie” Grace. Their baby weighed 7 pounds and 10.01 ounces, and was born at 1:12 a.m. on Thursday, May 12.

Her friends, colleagues, and followers all wished her well on social media.

Candace Cameron Bure wrote, “Congratulations mama!!!!! And ummm…. Agreeing with @danicamckellar on all levels!!!! I can’t wait to hear the birth story. I’m so glad you and baby are safe and healthy. Sending all my love to you and your ever growing family!!!! 💕❤️”

Danica McKellar wrote, “Congratulations!!!! 💕💕💕 She’s beautiful!! And, um, NOBODY looks that good the day after giving birth – who are you?? 🤯😍”

Lilley and Wayne adopted half-brothers Kayden and Jeffrey from foster care. They also have a daughter, Julie, who was born in 2019. Lilley told People that while Julie was planned, their new baby was a big surprise.

Lilley told People: “I felt very pregnant and I thought, ‘This is very weird.’ I was excited, but also it was so strange. I was in this long customs line in Canada waiting for my work permit, and I’m texting my husband and our nanny via group text, ‘I think I’m pregnant right now?’”

She said her pregnancy test first came back negative, but she didn’t believe it. Her second test came back positive and a doctor later confirmed the pregnancy.

In 2019, Lilley was on the red carpet when she went into labor. During an interview with Access, she revealed that she was in labor right at that moment.

“I’m literally in labor…” she told the reporter. “I’m early… I gotta get to my phone at some point to time the contractions, but I’m closer to Cedars than if I was at home. I’m not that close. I can still talk.”

She told People that because her contractions were inconsistent, she didn’t want to miss the TCA event.