Throughout Karlie Redd’s career in reality television, her age had always been a mystery. When asked, she wasn’t open to revealing it but that changed in 2019. During an appearance on The Real, she revealed she was 45 at the time, which means she will turn 47 this year. In an interview with MadameNoire, she explained why she regrets telling the world her age.

It really did bring checks to the household when nobody knew my age. It was an extra check that came in. Honestly! It was one of the highest things on Google, my age. Wanting to know my age was one of the highest trending topics, so I’m kind of mad that I said what my age was [laughs]. I could have got another check [laughs]. I’m really mad that I let everybody know but it was like, ok, ok! It wasn’t that I was upset about people hounding me about my age. I don’t mind telling. But once I saw, it was just so crazy how they were infatuated knowing what my age was. And I see a couple of checks come in about it, I said ‘Well shoot, I want to go along with this and keep it a secret!’ But I just said forget it. Let me just tell everybody. It doesn’t even matter. It’s a lot of our cast members that are even older than me but they don’t get hounded about their age. A lot of actors are older than me but who cares? Age is just a number.

On VH1’s new series, Family Reunion: Love & Hip Hop Edition, Redd brought along her daughter Jasmine to participate in the six-part series. Redd’s ex-boyfriend, Yung Joc, also brought his son Jayden. During the teaser, Jayden is seen trying to shoot his shot with Jasmine, something Redd is not happy about. She explained to MadameNoire that she doesn’t want her daughter with Jayden because she suspects that he is a lot like his father.

“It’s too close for comfort,” the Love & Hip Hop Atlanta star said. “I was dealing with Joc. It doesn’t feel right in my spirit. I was seeing him, you’re not about to see his son. No way! And if he’s anything like his father, you’re definitely not going to see the son!”

When asked about the possibility of Jayden being a great match for Jasmine, Redd said that couldn’t be possible.

Karlie Redd is Still Trying to Have Another Child 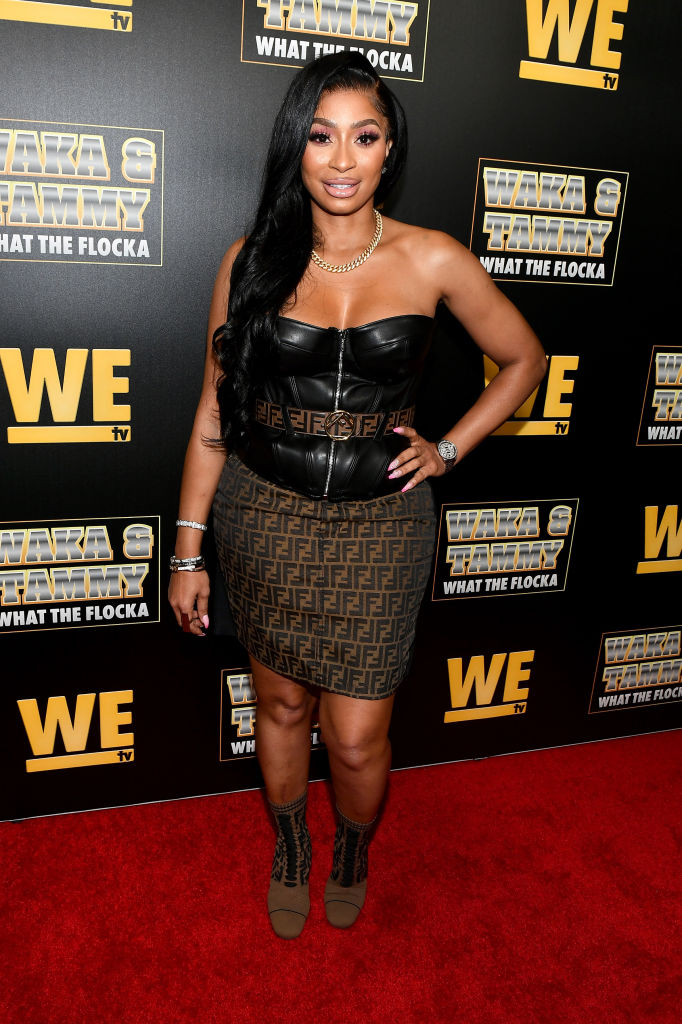 GettyKarlie Redd attends the premiere of “Waka & Tammy: What The Flocka” at Republic.

“I’m just looking for a donor,” she said. “I am doing it solo. So all the women out there, I really, I’m tired of women putting each other down because they don’t have a significant partner.”

She added that she sees a lot of her fans staying in abusive relationships because they don’t want to be criticized for raising their children alone. She encouraged them to not be concerned with the ridicule and be more focused on leaving.

“I get so many fans saying, ‘Hey I’m in an abusive relationship’ or ‘I’m in this relationship and I can’t stand it.’ I’m like, guys, c’mon! Don’t stay because everyone’s going to look at you and say ‘Oh, she’s not married’ or ‘She’s raising her child alone.’ Don’t stay because of that. It’s okay to leave an abusive relationship. It’s okay! It’s the right thing to do. People hit me up in my DMS all the time and I tell them, ‘Hey, let me know how I can help you. You have to get out.’ You have to seek help. It’s OK to go.’”

READ NEXT: Did This ‘Love & Hip Hop’ Couple Call Off Their Divorce?

Loading more stories
wpDiscuz
0
0
Would love your thoughts, please comment.x
()
x
| Reply
Karlie Redd opened up about her real age and why she kept quiet for so many years.