Getty Saweetie and Quavo attend the 2019 GQ Men of the Year at The West Hollywood Edition.

A video of rappers Saweetie and Quavo, who recently ended their relationship, having a physical altercation has surfaced. In the video, which was released by TMZ, the two are seen getting physical while getting on an elevator.

In the video, the doors open and Saweetie, born Diamonte Harper, swings on Quavo. She misses and then picks up an orange suitcase that he dropped. The Migos rapper then drags her into the elevator as they tug over the suitcase and they both fall to the floor of the elevator. Quavo, ne Quavious Marshall, then gets up but Saweetie doesn’t. The elevator then goes to another floor and the people waiting do not get on. For the remainder of the one minute and 30 second video, Quavo didn’t offer her any assistance and noticed there was a camera in the elevator. Saweetie continues to sit on the floor and didn’t get up until it was time for her exit. When she did get up, she limped off of the elevator.

TMZ reported that they spoke to sources from Quavo and Saweetie’s camps and they all confirmed that the video was from an incident in 2020 that occurred at an North Hollywood, California apartment complex where Saweetie was living.

See the video below. 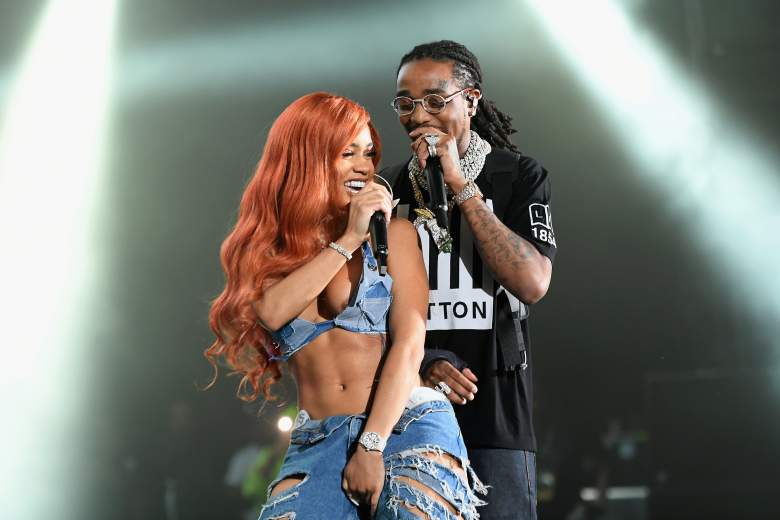 GettySaweetie, and Quavo of Migos perform at Summer Jam 2019.

After it was revealed that the two unfollowed each other on Instagram, Saweetie revealed that she and Quavo were no longer an item. On Twitter, the “Tap In” rapper said Quavo was unfaithful during their relationship.

“I’m single,” she tweeted. “I’ve endured too much betrayal and hurt behind the scenes for a false narrative to be circulating that degrades my character. Presents don’t band aid scars and the love isn’t real when the intimacy is given to other women.”

She added, “I emotionally checked out a long time ago and have walked away with a deep sense of peace and freedom. Excited for this new chapter of elevation.”

Quavo responded saying he was disappointed that Saweetie shared their breakup with the world.

“I know you want to make this into a show so I’ll play my part just this one time,” he wrote. “I don’t normally put my business out there, especially my personal life. I feel the need to address this so there are no false narratives. I had love for you and disappointed you did all that. You are not the woman I thought you were. I wish you nothing but the best.”

I know you want to make this into a show so I’ll play my part just this one time.
I don’t normally put my business out there, especially my personal life. I feel the need to address this so there are no false narratives.

Saweetie and Quavo began dating back in 2018. Quavo told GQ that he messaged Saweetie after she came across his Explore page on Instagram.