Lisa Rinna slammed her daughter Amelia Gray Hamlin’s relationship with Scott Disick. On the most recent episode of the “Real Housewives of Beverly Hills,” the Rinna Beauty founder compared her two daughters’ romantic relationships and definitely made it known that she and her husband Harry Hamlin favored one of them. She also suggested a replacement boyfriend for one of her girls.

As Rinna and her daughters Amelia and Delilah Hamlin looked at vintage gowns, the “RHOBH” veteran praised Delilah’s relationship with “Love Island” alum Eyal Booker. The two have been dating since 2019, per ScreenRant.

“We love Eyal. He’s so good for Delilah,” Rinna said during the episode. “Harry’s made it quite clear that he would not object if Delilah and Eyal got married, which is pretty shocking, but that says a lot. I can’t say the same for Amelia at this point now.”

Rinna then addressed her younger daughter’s relationship with reality star Scott Disick, who is 19 years her senior.

“Like, why can’t it be Harry Styles?” Rinna said of Amelia’s boyfriend. “Why the f*** is it Scott Disick?”

Rinna Has a Soft Spot For Harry Styles

Fans know that Rinna is a Harry Styles fan. In the past, she has posted her famous Instagram dance videos to songs by the One Direction alum. In 2020, Rinna even did a full parody of Styles’ song, “Watermelon Sugar,”  per The Things.

For her birthday last year, Styles returned the fandom. According to Capital FM, Styles slid into Rinna’s Instagram DMs to mark her special day last July.

“HAPPY BIRTHDAYYYYYY. Hope you have a wonderful one. H,” the 27-year-old music superstar wrote to Rinna, along with the heart-eye emoji.

Rinna shared a screenshot of the sweet message on her Instagram Story.

While She Loves Styles, Fans Think Rinna Also Secretly Loves the Attention That Scott Disick is Bringing to Her Family 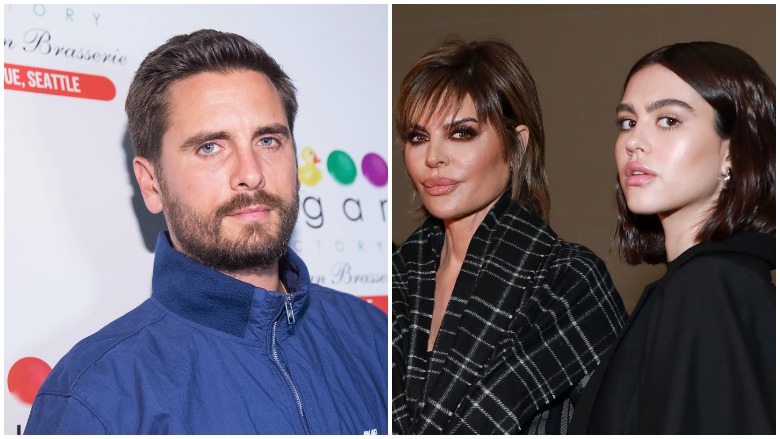 Rinna has spoken out multiple times about her daughter’s romance with Disnci – who shares three children with his ex, Kourtney Kardashian. Earlier this season, co-star Kyle Richards even declared, “He’s too damn old… and he’s got three kids!” to which Rinna replied, “I know!”

An insider told E! News that when their daughter first started dating Disick, Rinna and Hamlin beloved it was “just a phase” and would fizzle out. The two have now been dating for nearly a year.

But on social media, fans reacted to Rinna’s latest Disick rant and many of them noted that she is getting a lot of “mileage” out of dragging the “Keeping Up With the Kardashians” star on-camera. Others speculated that she is secretly happy about the relationship.

“Lisa Rinna clearly loves that her daughter is dating Scott Disick, she always has to remind us,”  one viewer wrote on Twitter.

”Not Lisa Rinna mentioning the fact that Amelia is dating Scott Disick every chance she gets chile #RHOBH,” another added.

“Lisa Rinna constantly brings up her daughter’s relationship with Scott Disick and pretends to be annoyed by it, when in reality she obviously loves the 2nd-degree clout,” another wrote. “Case in point, her decision to go to Crystal [Kung Minkoff’s party] dressed like a Kardashian!”

Loading more stories
wpDiscuz
0
0
Would love your thoughts, please comment.x
()
x
| Reply
'The Real Housewives of Beverly Hills' star had a lot to say about her daughter's relationship