Getty Kyle Richards at the premiere for Halloween Kills.

The “Real Housewives of Beverly Hills” got into Halloween mode – with some killer costumes.

Several stars from the Bravo reality show supported Kyle Richards at the premiere for her upcoming horror film, “Halloween Kills.” The “RHOBH” star reprised her role as Lindsey Wallace in the sequel movie which takes place 43 years after she first played the role as a child in the 1978 horror classic, “Halloween.”

The “Halloween Kills” premiere was held at TCL Chinese Theatre in Hollywood on Tuesday, October 12, and it featured a red carpet costume party, according to Vulture.

The RHOBH Cast Wore Costumes That Poked Fun at their Show 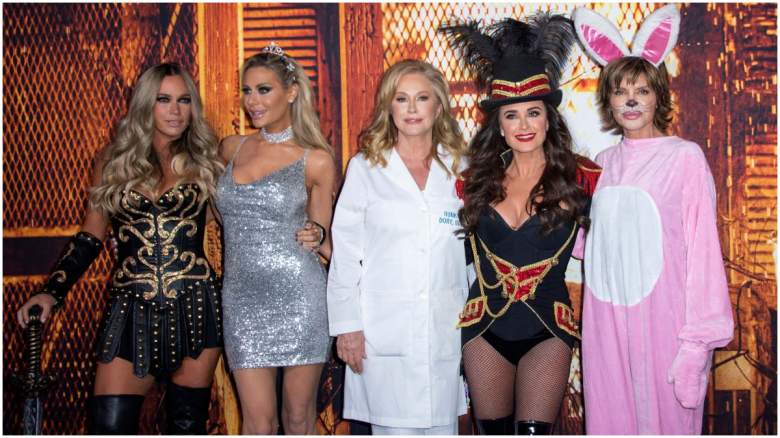 In photos shared on social media, Richards posed with her sister Kathy Hilton, as well as co-stars Dorit Kemsley and Lisa Rinna. All of the Bravo stars wore outfits that poked fun at their personas.

Richards wore a sparkly buster, fishnets, and a feathery top hat to play a sexy ringmaster. She told Entertainment Tonight, “It was the first costume I saw at trashy lingerie and I didn’t have a lot of time. I was gonna send a picture to [co-star Jamie Lee Curtis] and say, ‘Is this OK? Is this appropriate?’ But I thought, you know, she’s probably busy. So I took a risk tonight.”

At the premiere, Kathy Hilton wore white scrubs for a dentist costume, and a zoom-in on her outfit revealed that her dentist name was Hunky Dory, DDS. “Hunky Dory” has been Hilton’s signature line during her freshman season on “The Real Housewives of Beverly Hills.” She has also joked that when she was a kid she used to play “dentist” with her friends.

Dorit Kemsley went into a youthful glam mode to channel Hilton’s daughter, Paris, for her costume. The Beverly Beach founder also shared an Instagram video as she was getting ready to channel the celebutante in a silver sequined dress. In the clip, Kemsley got glammed up while singing Paris’ song “Stars Are Blind.”

And Lisa Rinna dressed in a pink bunny costume, which was a clear nod to “Bunny Gate.” Longtime “RHOBH” fans know that Rinna once gifted a stuffed bunny to former co-star Kim Richards’ grandson, but  Richards gave it back to her during a “RHOBH” reunion taping because she felt it had bad “energy.”

In addition to posing with her Bravo besties, Richards spent time on the red carpet with Jamie Lee Curtis, who plays Laurie Strode in “Halloween Kills.” Curtis stunned fans in her costume, which was a nod to her late mother, Janet Leigh, and her role as Marion Crane in the 1960 horror movie classic, “Psycho,” complete with a bloody shower curtain.

“I am honoring my beautiful late mama, Janet Leigh, but… it’s a little more meta than that,” Curtis told Entertainment Tonight. “I am actually going as Scarlett Johansson as Janet Leigh in the movie ‘Hitchcock.’ So it’s meta because we never knew what color Janet Leigh’s dress was because it was a black-and-white movie. But now because of the ‘Hitchcock’ movie, we know it was pale blue.”

Other famous friends who came out to support Cutis and Richards’ movie included Teddi Mellencamp and Faye Resnick. Mellencamp dressed as a sexy gladiator, according to The Daily Mail, while Resnick came to the event as Neo from “The Matrix.”

What is Teddy doing there?