On tonight’s episode of “The Bachelorette”, Katie Thurston is laying down the law. When the show left off last week, Thurston told her remaining contestants that she wanted them to leave if they weren’t there for the right reasons.

The official press release for tonight’s episode reads, “… Katie literally flips head over heels for her one-on-one date with Michael A., who opens up with a deeply heartfelt story of how he decided to follow his heart to New Mexico, and drama begins to boil over in the house. Is someone still here for the wrong reasons?”

A preview for tonight’s episode features Karl Smith, who gets heat from his fellow contestants after telling Thurston that some guys aren’t there for the right reasons.

Based on the previews, it appears that the drama then shifts to Thomas Jacobs, who admits that he has thought about being the franchise’s next lead.

This all kicks off after Aaron Clancy stated that Jacobs, who is 28, came on the show “for a platform.”

When Clancy asks, “Have you ever thought, ‘Maybe, I could end up being the Bachelor?’,” Jacobs responds, “Yes, that was a thought that was on my mind.”

If one thing is clear, it’s that Thurston is not here to play games. Last week, she sent Cody Menk home after it was suggested that he had other intentions in mind appearing on the show, and that didn’t sit well with Thurston, so she sent him home. There’s nothing keeping her from sending someone else home for similar reasons.

Katie’s 1-on-1 Date with Michael Allio

Tonight, Thurston’s one-on-one date is with Michael Allio, who is 36 and works as a business owner, according to his ABC bio.

During Allio’s date with Thurston, their dune buggy flips over. Fortunately, based on previews, it appears that no one was hurt and the date proceeded as planned.

According to US Weekly, Allio hails from Ohio. During the premiere episode, we learned that he has a son, James, and that, per the outlet, he FaceTimed him daily with James while filming the show in New Mexico.

According to US Weekly, Michael and his late wife, Laura, welcomed James in September 2016.

In 2017, Laura was diagnosed with breast cancer. She passed two years later. Since then, Allio has devoted his time to the L4 Project, which aims to “ensure that individuals and families battling cancer are surrounded by a support network that allows them to focus on treatment, recovery, and living joyous lives.”

Is That… Nick Viall? 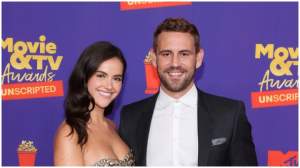 In the promo for tonight’s episode, a familiar face in the form of Bachelor Nation’s Nick Viall shows up and tells Thurston that he will “hold guys accountable.” In other words, Viall is there to help Thurston discern which contestants are there for the right reasons.

Viall was a contestant on the 10th season of “The Bachelorette” and finished runnerup. He then appeared on Season 11, where he finished runner-up once again.

In 2016, Viall was the lead of the 21st season of “The Bachelor.” Since then, he has been the host of a podcast called “The Viall Viles”.

Loading more stories
What drama will go down on tonight's episode of 'The Bachelor'? Get the details here.