Former “The Voice” coach Adam Levine has been accused of cheating on his wife in a viral TikTok video posted by Instagram model Sumner Stroh, who says she was his mistress. Levine’s wife, Victoria’s Secret model Behati Prinsloo, is pregnant with their third child. The couple has been married since 2014.

Levine has not commented about the accusations made in the video, which racked up more than one million views in less than three hours and caused the Maroon 5 singer’s name to trend on Twitter. Stroh posted the video on September 19, 2022, with the caption, “embarrassed I was involved w a man with this utter lack of remorse and respect.” Stroh did not say exactly when and Levine were involved in a relationship but said in the TikTok video it was while he was married to Prinsloo.

Stroh, a 23-year-old Texas native, said in the video, “I was having an affair with who is married to a Victoria’s Secret model. At the time, you know, I was young, I was naive, and, I mean, quite frankly I feel exploited. I wasn’t in the scene like I am now. So I was definitely very easily manipulated.”

Adam Levine is finna be going through it bucko. Holy smokes this woman spilled all the beans. That naming the kid part is effing SICK. Yikes. pic.twitter.com/6GWKWl7Vc8

In her TikTok video, Stroh revealed Instagram messages from Levine. She said in the video, “Maroon 5 is practically elevator music at this point. So, I’m sure you know who Adam Levine is. Adam and I were seeing each other for about a year. After I stopped talking to him over a period of months, this is how he came back into my life.”

Stroh then showed a message from Levine saying, “Ok serious question. I’m having another baby and if it’s w boy I really wanna name it Sumner. You ok with that? DEAD serious.” He then followed up with a shrugging shoulders emoji three minutes later, according to the screenshot Stroh shared in the TikTok video.

Stroh said in the video, “I was like, ‘I’m in hell. I have to be in hell at this point.'” Levine, 43, and Prinsloo, 34, revealed in early September that she was pregnant with their third child, according to People. The couple have two other children together, a 4-year-old daughter, Gio Grace, and a 5-year-old daughter, Dusty Rose. 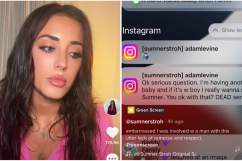 Stroh Said in an Instagram Story ‘Hopefully, at the Very Least, the Truth Being Out Can Do Some Good’

In her video, Stroh said, “My morals were unknowingly compromised. … I was going to handle this privately, I never wanted to come forward, because obviously I understand the implications that come with doing what I do, making money the way I do, and being an Instagram model. So being tagged in a story like this, I know the stereotypes.”

Stroh added, “I had sent some screenshots recklessly to some friends I thought I trusted and one of them had attempted to sell to a tabloid. So here I am.” Stroh has not posted any other information or videos on TikTok about her accusations. In the comments on her original video, Stroh responded to a commenter who asked why she didn’t go to his wife, writing, “I tried.” In another reply to a commenter, she said she has been “sick about this,” and wrote “I’m aware” in response to a comment saying “No one looks good in this story.”

In an Instagram story, Stroh wrote, “Aware people are going to try to fill in the gaps with many false assumptions. I don’t feel like I’m doing any favors considering the manner this had to go about. … It’s a lot to digest but hopefully, at the very least, the truth being out can do some good.”