Getty The grave site of singer Whitney Houston located in the East Ridge section of the Fairview Cemetery on February 20, 2012 in Westfield, New Jersey.

The Grammy-winning singer was 48 when she was found dead in a bathtub at the Beverly Hills Hilton on the night before the 2012 Grammy Awards.

Just as shocking was the 2015 death of her 22-year-old daughter, who fell into a coma after a separate bathtub tragedy and died while in hospice six months later.

Five years after Bobbi Kristina’s death, many people still wonder where she was buried and if it is near her mother’s gravesite.

Whitney & Bobbi Kristina Are Buried Side By Side at a Cemetery in Westfield, New Jersey 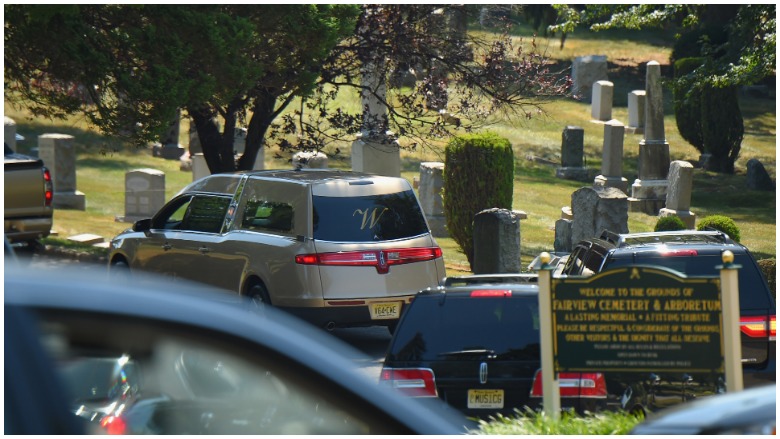 Whitney and her daughter are both buried at the Fairview Cemetery in Westfield, New Jersey, according to USA Today. Five years after her mother’s burial at the New Jersey cemetery,  a gold hearse carried the casket of Bobbi Kristina to the same location.

Two SUVs followed the hearse into the cemetery as several family members, including Bobbi Kristina’s father, singer Bobby Brown,  made their way to the burial site. Whitney’s mother, Cissy Houston, and cousin Dionne Warwick, were also at the private burial.

The roads to the cemetery were blocked off by police so members of the public could not drive up to the site.  A few fans could be seen at the gates of the cemetery, according to the BBC.

The mother and daughter are buried by the grave of Whitney’s father, John Russell Houston, in the East Ridge section of the Fairview Cemetery. 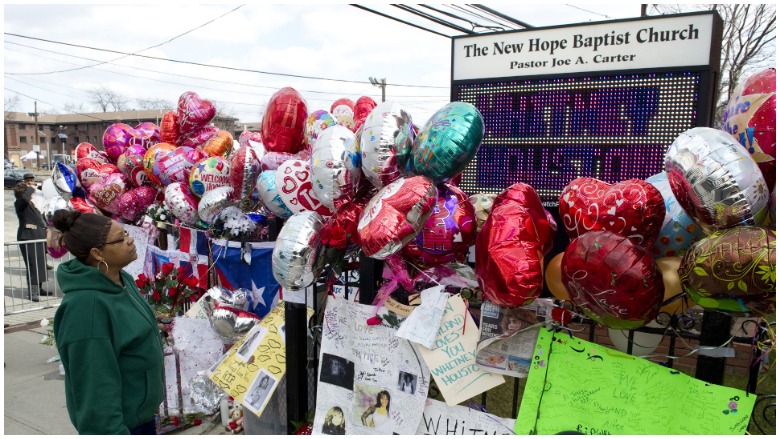 GettyA woman reads messages at a memorial, for singer Whitney Houston, set up outside New Hope Baptist Church on February 17, 2012, in Newark, New Jersey. Funeral services for the singer are planned for February 18, 2012, at the church.

Whitney Houston’s funeral service was held on February 19, 2012, at the New Hope Baptist Church in Newark, New Jersey. It was the church the future superstar grew up in.

At the end of his emotional eulogy, Costner envisioned Houston being escorted to heaven by “an army of angels” as he told her how much she was loved by everyone who knew her, per The New York Post.

Bobbi Kristina’s funeral was held August 1, 2015, at St. James United Methodist Church in Alpharetta, Georgia, Sadly, the service was in stark contrast to the funeral for her mother just three years earlier.

In a shocking turn of events, the service for Bobbi Kristina was interrupted by her paternal aunt, Leolah Brown, who became angry as the late young woman’s maternal aunt, Pat Houston, approached the podium to deliver the eulogy.

Leolah Brown was escorted out of the service by security after she began screaming at Pat, who was Whitney’s manager and sister-in-law, according to ET Online. Tyler Perry attempted to calm Leolah down before security ushered her out of the church.

An upset Leolah later spoke outside of the church to say that Whitney will “haunt” Pat from her grave. She then accused Pat Houston of being a “phony person” and said she had “evidence” about the kind of person she really was.

“Krissi, she’ll be remembered in our hearts forever. Just like Whitney,” the grieving aunt also said from outside of the church.