If Luke Skywalker was the center of the Star Wars galaxy, then Rey — his apprentice — has taken her place in the center of the orbit. The similarities between the two characters aren’t coincidental. Both outliers, they make their ways through the saga to become the central focus of their respective stories. Rey is clearly the leader for a new generation of Star Wars fans. First revealed in Star Wars: The Force Awakens, Rey once again led the Resistance in the latest chapter of the Star Wars franchise in Star Wars: The Last Jedi.

It’s in large part because of Rey’s importance in the Resistance that cosplayers go full Rey with frequency. (It doesn’t hurt that the actress Daisy Ridley gives such a great performance and is such a…well…just plain nice person in real life.)

The options for Rey costumes are, surprisingly, somewhat thin. We’ve narrowed this list to five: three for adults and two for kids, and they’re presented to represent the options from each movie that features Rey. The main difference between the costume look from The Force Awakens and The Last Jedi is, largely, the darker shading, and more grey, in the Episode VIII (Jedi) gear. As more are added — and they very likely will be as we approach Halloween — we’ll be updating this list.

Rey Out of Her Costume

For a little bit of fun, take a look at this behind-the-scenes video featuring the hard work that Daisy Ridley — and her co-stars — put into preparing for the physical aspects of their roles.

It’s an iconic role now, and we’re sure that you’ll find something that works well for you in our list of the Top 5 Best Star Wars Rey Cosplay Costumes. May the Rey be with you.

This is the costume that was featured when Rey was first introduced to the universe, as it’s the version from Star Wars: The Force Awakens. This Rey cosplay costume includes the jumpsuit with attached apron, detached sleeves and a belt. There are a few great accessories you could add to the mix, including leg wear that features Rey’s name and picture; an eye mask and hood; or Rey’s staff. 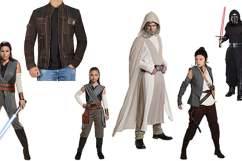 From The Last Jedi, this is an officially licensed costume from Rubie’s, which is a family business that’s been making costumes for more than 60 years. This Rey Last Jedi costume includes a jumpsuit with attached wraps and boot tops, the belt, the cuff and two arm warmers (oversleeves). If you want to include the Rey wig and a lightsaber, check out this bundled option, which does cost a bit more. 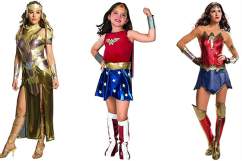 There are a ton of great reviews for this Rey cosplay costume, which is from Rey’s first appearance, which was in Star Wars: The Force Awakens. This officially licensed costume from Rubie’s includes deluxe top, elastic waist pants, detached sleeves, cuff, and belt with pouch. This one has a lighter color than the version from Jedi. For possible accessories, take a look at this canvas side bag or this eye mask with hood. 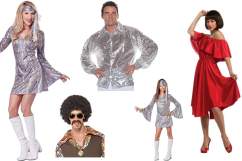 This is the look from The Last Jedi. Darker colors, more grey. This deluxe option Rey cosplay costume comes with the top and its attached wraps, the pants with attached boot tops, a cuff, the two arm warms and the belt (with the holster). Once again, this is from Rubie’s and it is an officially licensed costume. If you want to complete the look, you can go for this deluxe Rey The Last Jedi bundle, which has the costume but also includes the wig and the lightsaber. If you just want the wig, go here. If you just want Rey’s staff, go here. 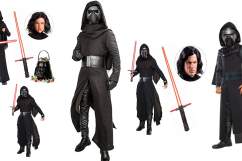 This is the only Rey cosplay costume of the list that is not made by Rubie’s. This one is elevated a bit, in that it uses better materials and is possibly even better suited to cosplay than the other options. This one includes the shirt, pants, bag, belt (2), cuff and two oversleeves. The materials are cotton and leather. One of the reviewers talked about the high quality, calling it “One of the best quality costumes ever…cannot compare to any of the other brands being sold online.” 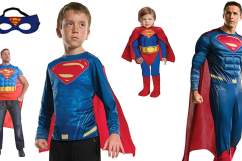